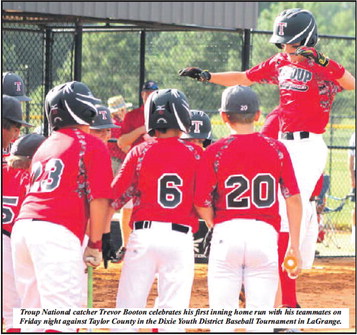 Coach Curt Longshore and the Troup National All-Stars made a first impression that Taylor County will never forget.

“It’s always important to win that first game. We played solid defense, and we put the ball in play,” said Longshore, who wasn’t surprised by anything that he saw from his red hot Troup National team.

The local boys began the game by knocking Taylor County on its heels with back-to-back home runs from Colton Esposito and Trevor Booton in the top of the first inning. Troup National would tack on another run for a 3-0 advantage after an Avery Hewell single, a Bryson Cockrell double and a Taylor County throwing error.

“We got down, and we could not get back. We left our pitches up, and they hit it hard. We need good pitching and defense,” said Taylor County head coach Brad Lawhorn.

The visitors would give up another run in the top of the second inning. Troup National took a 4-0 lead on a Dallas Pearson bunt single and a Taylor County three-base throwing error. Troup National could do no wrong.

The Taylor County All-Stars could do no right, or so it seemed.

“We kept making mistakes,” said Taylor County first baseman Aaron Fossel. “We were scared of the speed of their pitchers.”

They didn’t get their first hit until the bottom of the third inning on a Justin Eubanks single to right field. Fossel had some brief success, too, with a double in the fifth inning. Emmanuel Burgess and Nolan Hunter also scraped up hits against Troup National, too, with some late-inning singles.

“We made contact. Everybody was doing something to help the team,” said Esposito. “They were throwing it down the pipe.”

Bryson Cockrell was playing a little “hit and run” for Troup National in the top of the fourth inning. Cockrell singled and stole second base. He also scored on a Taylor County wild pitch. The Troup National All-Stars leaped to a 6-0 lead.

The only run of the game for the Taylor County All-Stars was scored in the bottom of the fifth inning. The big blow in the inning came on a Fossel double.

Troup National still took a 9-1 win to the house. These all-stars kind of expected something like that.

“We have good pitching, hitting and defense. We just loaded up and hit it (against Taylor County),” said Troup National catcher Trevor Booton.