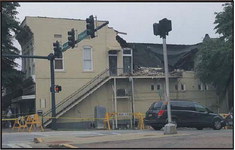 Late Friday night, La-Grange Police were shocked to find that an upper portion of the TWFG insurance building on Ridley Avenue had collapsed.

Police were called to the scene shortly after 10 p.m. upon reports of a brick in the roadway and officers arrived to discover the building had partially collapsed.

Fortunately, no one was hurt due to the building being unoccupied at the time and the late hour of the collapse likely prevented any injuries to passersby.

The left lane of Ridley Avenue across from government center has been temporarily closed to prevent anyone from getting hurt from more falling debris as the building may continue to collapse.

So far, only the rear second floor of the building has collapsed, but officials could not say that further damage would not occur.