State Senator Brass Is All About Education, Tourism, Solving Problems 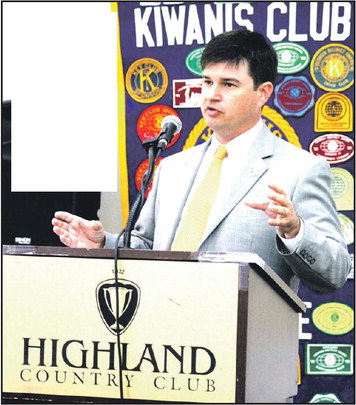 In his own way, Matt Brass is unique.

“I’m a Georgia Bulldog, but I grew up in a Georgia Tech home,” said Brass, who is young, energetic and a newly elected Georgia State Sen. from Newnan.

Brass has been a state senator for five months, and he is one of the few politicians who can drive a golf ball 270 yards off the tee. Brass was a golf pro for eight years. He played the game, as well as watching golf from the tee, to the fairway, to the green.

Besides that, Brass was a problem solver.

The state senate is where he now resides, as he made that plain and apparent at the Thursday afternoon meeting of the Kiwanis Club of LaGrange. Brass was the guest speaker, and his message was tastier than the chicken alfredo at the Highland Country Club.

At the top of Brass’ list of topics was education for Georgia.

“We’ve got some of the best schools in this state. Education is about parental involvement, and we (still) want more accountability,” said Brass, who is a member of the Education and Youth Committee.

The new state senator also supports the “School Turnaround Bill,” which helps failing schools around Georgia. Sometimes the helping hands can be in the form of tutoring or mentoring.

“Sometimes it can be what they (the students) need to eat the night before a test,” said Brass.

At the Kiwanis Club meeting, Brass also spoke on economic development and tourism, which he is the vice chairman for at the state level. As the senator made it clear, the film industry has found a home in Georgia.

It is a money-maker in the ‘Peach State.’ “Georgia is a model for other states (with the movie industry). People show up to see an actor or actress for five seconds (on the movie set),” said Brass. “I love this state.”

The state of Georgia loves Brass right back. He is rolling up his shirt sleeves and is going to work in his first year as a state senator. Brass is also a member of the Natural Resources and Environment Committee.

The United States Navy veteran and Bulldog football fan is also the secretary for the State and Local Government Committee. Brass is working hard for the citizens of Georgia and District 28.

The ex-golf pro is finding some answers, and he is making some friends.