Bigsby Is As Versatile As It Gets For Cavaliers 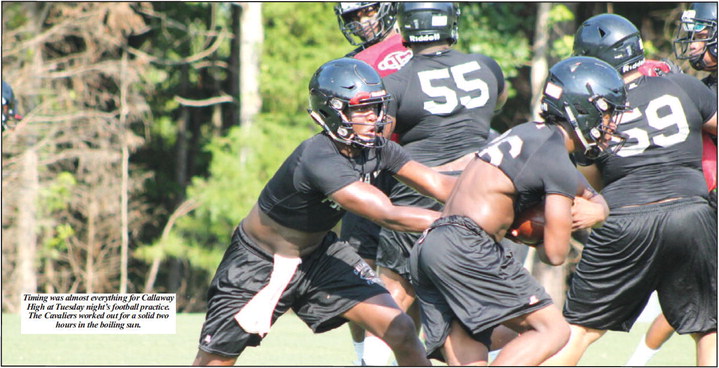 There is virtually no position that Cartavious Bigsby can’t play.

“I can do it all. I’m a wide receiver, a running back and a safety,” said Bigsby, the Callaway High sophomore.

Bigsby is also a team player. He is willing to do most anything to help the Cavalier cause. Bigsby, the kid with the 4.4 speed in the 40-yard dash, was doing it again at full speed for the Cavaliers on Tuesday night in Callaway’s first preseason football workout.

The Cavaliers were in their usual ultra-fast mode with the help of more than 80 players. Bigsby was one of those. He was one of the tone-setters on day one of the Callaway High football drills, preseason style.

“We’re grinding hard and staying positive. We have a lot of talent, and we’re looking pretty good,” said the6-foot,180-poundBigsby.

He stood out on this night whether he wanted to or not. Some football players are like that. Bigsby is one of the chosen few who are head and shoulders above the rest.

There is a word for it.

“I’m trying to bring leadership (to the team). If you’re a true dog you’ve got to want it. We do have good coaches, and we’re pointed in the right direction,” said Bigsby.

He was not the only leader type on head coach Pete Wiggins’ field at Callaway High School. Travis Traylor, the senior fullback and linebacker, set a good example, too, by his mere football actions.

And it was not just for show. Traylor was authentic, and he was going full tilt.

“We’re hustling and working hard. We’re loving it. We’re getting to the ball a whole lot more. We have some D-I talent. We have no quit,” said Traylor, the 5-foot-11, 195-pound every day Cavalier.

And what do those Callaway High football coaches expect even on the first day of preseason practice in Hogansville?

“They expect 110 percent and no quit,” said Traylor.

As for the quarterback position, Kedrick Ramsey is No. 1 on the depth chart for the Cavaliers. Somebody is watching.

“This is my senior year, and we’ve got to put everything together,” said Ramsey.

So far,so good. The Cavaliers are off to a spirited start in the preseason. They are receiving discipline, constant critiques and two hours of practice time.

Callaway sophomore Jacob Freeman has a sense of belonging, too.

“We feel like a family, and we can be as good as any team. We keep push ing, and we’re staying upbeat. We’re getting focused,” said Freeman, the 5-foot-10, 176-pound split end and cornerback.

Freeman is a playmaker in training. And Matt Napier is making sure Freeman minds his P’s and Q’s from the locker room to the football field. Napier is the Cavalier offensive coordinator of 13 years.

“Our players have great attitudes, and they want to win. We have high expectations around here. We have a little excitement (going),” said Napier.

Callaway High also has a preseason scrimmage slated for Friday, Aug. 11 against Columbus Northside. That game will start at 7:30 p.m. at the Hogansville Elementary School football field.