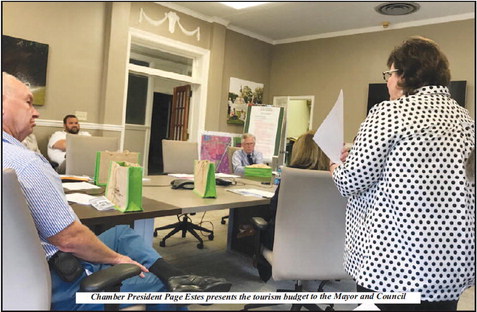 After the cancellation of their last meeting, the Mayor and Council here in LaGrange were back in full swing this past Tuesday morning, July 25th as they returned with a full agenda and several presentations. The meeting room was packed that morning as the group had much to cover after their absence. Out of the many items on the agenda and many things to discuss, one of the more pressing issues was the update on the budget for the Chamber of Commerce, LaGrange’s main marketing and tourism tool. That morning Page Estes and Dave Marler were on hand to brief the council on the upcoming year.

For many years now, La-Grange has designated an outside entity to act as their marketing agent and delegates a certain percentage of their hotel/motel tax to that outside agent for the purpose of market, a requirement by state law. That agency has been, for many years, your local Chamber of Commerce. The Chamber has two main charges: to generate overnight stays by promoting their cities as tourist destinations and to be good stewards of the hotel/motel tax and expanding these funds. They have gone about these in various ways over recent years.

In 2015, the tourism in Troup County supported 1,160 tourism related jobs. This led to an estimated $156 million in tourist spending and saved the average household $428 in taxes. Over the fiscal year from FY16 to FY17, LaGrange saw a 5% increase in the hotel/motel tax. This has been a trend for seven out of the past eight years. Then recently, for the first time since 1991, the Chamber of Commerce is now the direct marketing organ for not only LaGrange but also Hogansville, West Point, and Troup County, with West Point recently coming on board. In fact, the Chamber opened a new office in downtown West Point in March of this year. With all of the progress of the past, the Chamber now has its eyes set towards goals of the future.

The total income that the Chamber has proposed for FY18 will be an income and expense that are both the same at $696,500. With the budget balanced and even this year in comparison to years past, along with an expected 3% increase with the new downtown hotel, the Chamber has its eyes set on many new projects. These could include attracting more people to West Point Lake, new conventions with space such as the Great Wolf Conference Center, more huge outdoor events like USA South, Sweetland packaging promotion, housing NCAA football teams that will play in Auburn at our hotels, and attracting more millennials and retirees alike. These are just a few of the things on the Chamber’s radar.

The Chamber’s partnerships with all three cities and Troup County are so important for the economic sustainability and growth of our community. They are very dedicated individuals that are truly concerned about growing LaGrange and Troup County to the absolute maximum that it can be. Keep an eye out for all of the events that your local Chamber of Commerce will sponsor over the course of the next calendar year.