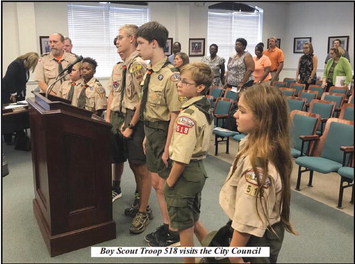 The Mayor and City Council of LaGrange returned to their regular meeting schedule this past Tuesday night, July 25th with several items on their agenda. After missing their last meeting, the city had several things to attend to this week, including several calls for public hearings, petitions and communications, and many first reading of ordinances. After the prayer and the pledge, the meeting was underway.

The most heartwarming story to come out of the meeting that night was the delegation from Jerome Cofield and his initiative, Empowerment Wednesday. Back in 2006, Cofield started a movement called “Make a Child Smile” where he would help buy Christmas gifts for a child in need. After this grew and expanded, the operation became a 501c3 nonprofit that moved into helping high school seniors furnish their dorms, of which they helped 17 students throughout the year. In recent years, the operation has expanded into Empowerment Wednesday. This is a day when Cofield and other invited guests, such as Mayor Jim Thornton, travel to Whitesville Road Elementary School and help the kids tie ties to wear throughout the day. Cofield also provided statistics showing how this simple act dramatically decreased the number of students with infraction each month, dropping from 79 in fractures down to 4 by the end of the year. Cofield is now looking for a building to house his operation.

Under public hearings, there were three items. These items included renaming a portion of Niles Street as Vince Sutton Boulevard, naming Hills and Dales Farm Road, and a rezoning of a portion of property located off of Corporate Park East. All of these hearings were previously advertised before that nights meeting. There were no comments made on these hearings with the exception of Vince Sutton’s mother coming before the council to thank them for this great honor bestowed upon her son.

There were also two other items that were scheduled for public hearing for the August 8th meeting. These requests were an amending of the zoning ordinance to include brewpubs and microbreweries (in light of the new Wild Leap Brewery scheduled to open soon), and a recommendation for a request for a sign variance at 1496 Lafayette Parkway for signage at Synovus Bank.

During the City Councilors and the City Manager’s Reports that night, there was a motion made and carried to adopt the tourism budget as presented earlier that morning at the work session by Chamber President Page Estes. The Chamber acts as the main marketing agent for the City of LaGrange and as such, by state law, the city is required to send a certain percentage of its hotel/motel tax to the Chamber of Commerce.

There were also several items under resolutions that night. The first of these items dealt with the 2017 municipal elections. The Mayor and Council adopted the calendar of events for the year as well as designated Troup County Voter Registrar as Voter Registrar and Absent Ballot Clerk for the 2017 election. Mayor Thornton, Councilman Woodson, Councilman Gore, and Council Woman Tucker are all up for reelection this year. Also under resolutions, the Mayor and Council declared several surplus items, amended the Red Flag Regulations, talked about the Georgia Initiative for Community Housing (GICH), and authorized the agreement regarding the upcoming SPLOST vote in November.

The last thing that the group dealt with that night was several first readings of ordinances. These second readings and votes will take place at the next meeting in two weeks. The ordinances read that night included the renaming of a portion of Niles Street, the naming of Hills and Dales Farm Road, the rezoning of property on Corporate Park East, prohibiting a portion of parking on Hunnicutt Place, and amending the alcoholic beverage code for microbreweries and brewpubs.