Grangers Are Ready To Get Back To Winning Football 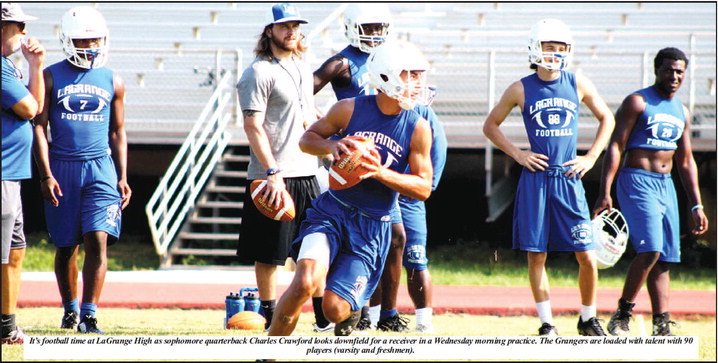 After consecutive seasons of 5-6, 5-5 and 2-8, LaGrange High football has something to prove. No doubt.

The first signs that change might be in the air have come this week with the start of preseason drills at LHS. The Grangers have rolled out a new attitude, a fresh set of practice t-shirts and 90 hungry players.

Nobody has passed out yet.

For LaGrange High, it simply wants to get back to winning football games. That does start on the practice field in late July when the temperature soars and the players drop another gallon of perspiration into the bucket for the Grangers.

“We’re coming ready to work.We’re hitting the weight room. We’re going to the field for two hours (of practice), and we’re getting to the ball,” said Zach Hansen, the LaGrange High sophomore tight end, as well as defensive lineman.

Hansen has room to grow at 6-foot-4 and 205 pounds. He also has room to run and is giving every ounce of energy that he has. Granger head coach Dialleo Burks expects that and more.

“We want to get better, and we are getting stronger and faster.We’re taking care of the small things.We’re preaching details,” said Burks.

Granger senior fullback Cornell Kendrick is buying everything that Burks is selling. Kendrick is a Granger through and through. He is even getting past the excessive heat.

Kendrick is breaking tackles. He is picking up first downs, and he is glad to be back on the practice field. It’s time to rock and roll.

“We’re running plays, and we’re getting ready to dominate. This is hard work. It’s intense. Everything is faster (out here),” said Kendrick.

Keone Milton, a sophomore offensive guard, is trying to catch the attention of the LaGrange High coaches, too. Milton is among the 90 football players for LHS – 67 varsity boys and 23 freshmen.

They know what the preseason is all about. This is a combination of work, fun and water breaks. The Grangers are suffering and grinding together in the summer heat. This is how teams are made.

“We’re taking a lot of reps, and we’re working hard on every play. We want to compete, and we are going to have a better season (this fall),” said the 275-pound Milton.

The Grangers first taste of actual game action will come next Friday night with a preseason scrimmage at Heard County. The football game will kick off at 7:30 p.m.