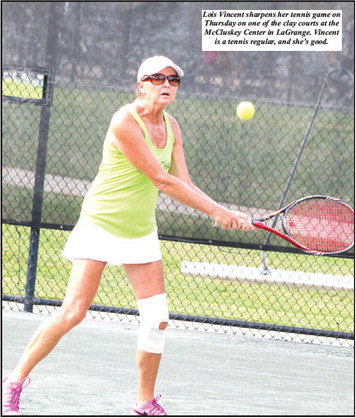 There is no place that Emily Mansour would rather be this weekend than in the Southern Tri-Level State Championships.

The McCluskey Tennis Center and LaGrange College will entertain the state tournament for yet another year beginning this Friday morning at 8 o’clock. More than 500 players from La-Grange to Savannah will play in the 5th annual tournament.

None of these State Tri-Level tennis tournaments have been played anywhere but LaGrange. That is a source of pride for the local tennis community.

“This is special. There is a lot of energy, and the nerves can get to you (as a player). You don’t want to let your team down,” said Mansour, who will represent LaGrange once again for the fifth time.

Local tennis talent Lois Vincent and Helen Rice have some Tri-Level State tennis experience, too. They are glad to see the tournament back in LaGrange.

“We have the best clay courts in Georgia,” said Vincent.

LaGrange also has some of the best adult doubles teams. All of this weekend’s matches will be doubles in the 18 and over, 40 and over and 55 and over divisions for men and women. LaGrange has won its share of State Tri-Level titles in the past, including two championships from 2015.

“This is very competitive with some great teams. People love tennis (in La-Grange), and we like to show our hospitality,” said Rice.

LaGrange will field some more top level teams this Friday, Saturday and Sunday with each day’s opening matches beginning at 8 a.m. The LaGrange 55 and over men’s team could win it all.

Most of the top local players will be there with Joey Keeth, David Barrett, Mike Speight, Jerry Key, Mike Yarborough, Greg Brannen and Mark Smith. Bill Champion, the head tennis pro at the McCluskey Center, will be gunning for another state tennis title, too.

“We’re going out there to have some fun and represent Troup County. It’s fun beating the bigger city teams (from Atlanta, Macon and Columbus),” said Champion. “We’re not throwing our rackets. Most of us are recreational players.”

But they do have some tennis gamesmanship and some backhands.