Tigers Are On The Clock, Troup Is Ready To Roll 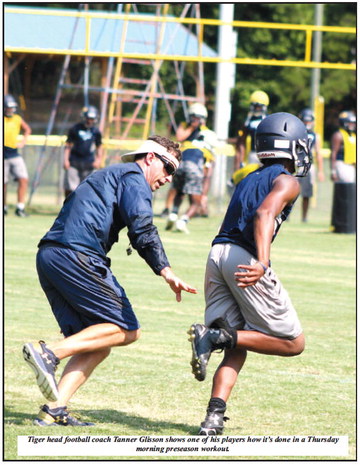 At every preseason football practice at Troup High School the scoreboard clock is turned on.

The clock is a reminder that every play counts, as does every second. The clock is motivation for a Tiger football program that showed some major improvement and movement last season.

Troup High went from 1-9 to 8-3 from one year to the next. The Tigers expect to continue that kind of trend this season. What they want now is consistency in the preseason, and the Tigers are getting it with the scoreboard clock in the background.

“We’re getting back into the routine. We want to win. We have good attitudes, and we’re having fun. We have a reputation of working hard,” said Troup High head football coach Tanner Glisson, who has rebuilt this Tiger program from the ground up.

The coach can’t hand out uniforms fast enough. Glisson has 70 football players who are looking to take the next step. It is a process, practice-by-practice.

Luckily, Glisson and the Tigers have some seniors to show the younger players how to practice, how to act and how to lead.

“We need to get better every day. We need more tempo, but we are confident,” said Tiger senior offensive guard Seth Adams.

Criticism is part of the game in the Troup High football program. But everything for the Tigers starts out with effort and execution. That takes no skill level, just a lot of want to.

Troup High football is getting tighter all the time. There is chemistry on the team. There are bruises, and there is competition for minutes on the ball field.

“We have depth, and we’re physical. We’re more of a pass-heavy team (this year). But we can run the ball, too. We have some weapons, and we’re still Troup,” said Tiger senior quarterback Montez Crowe, an All-Region talent.

“We’re further along. We have some changed bodies, and the weight room is a big thing for us. We’re bigger, stronger and faster (than last season),” said Glisson.

Troup High has some true pop with sophomore defensive tackleAndy Boykin, the former LaGrange High tight end. Boykin could start. He just looks like a football player at 6-foot-4 and 235 pounds.

Boykin is lean, mean and cat quick. He is a frequent topic in SEC circles. Boykin has scholarship offers from AuburnandGeorgia. Possibly the most improved Troup Tiger this year, however, is junior defensiveend King Mwikuta.

He is putting on muscle, and he is eating running backs for lunch. The 6foot-4, 232-pound Mwikuta has been offered scholarships by Alabama, Georgia andtheAuburnWarEagles.

“King is so much more mature (than last year). He is a coach’s dream, and he is businesslike,” said Glisson.