Bream Fishing Is Picking Up For Husband, Wife, Bailey 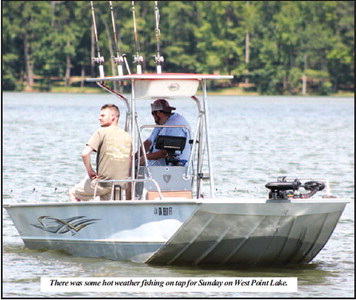 It was a family affair from the bow to the stern. We’re talking fishing.

Each and every bream was caught in seven feet of water with live bait.

“This was relaxing (for the anglers, not the fish). We threw a couple of worms out there, and the fish were biting. There were a lot of fishermen out there,” said Arthur Harris.

The bream were biting most of the day.

“We had one fish that went under a tree trunk (in the water) and broke the line,” said Carla Harris.

William Young and Tony Pinckney got a steady bite, too. They caught two crappie and one largemouth bass on artificial lures. Young and Pinckney just missed four other catches, all crappie.

“We were fishing shallow. We were no more than 10 feet deep,” said Pinckney.

“This is a tough lake to fish, but I like fishing. I fish this lake all the time. I’ve been coming here for 20-plus years. It’s so hot out there,” said Young.

Daniel Hardeman of Newnan keeps coming back to West Point Lake, too. Hardeman used a mixture of artificial lures to catch 11 spotted and largemouth bass on a recent trip. His best fish were 2-pounders.

“I was using a depth finder, and I was throwing jigs and crankbaits. You have to fish deep,” said Hardeman.

He caught some bass as deep as 25 feet. Hardeman also hooked into some bass in eight feet of water.

Having a not so lucky Sunday on West Point Lake was the fishing trio of Tyler Collins, Andy Hayes and Chris Winkles. They caught more wind and choppy waves than fish. The three fishermen made no catches.

“We were striper fishing, and we had one hit. It was pretty much a bad day. It was just too hot, and the water temperature was 86 degrees,” said Collins, a fisherman from Hogansville.

Collins has caught stripers as large as 18 pounds on West Point Lake, but not last weekend.

Not even live bait made much of a difference for Collins, Winkles and Hayes. They fished for six hours, but saw nothing resembling a striper.