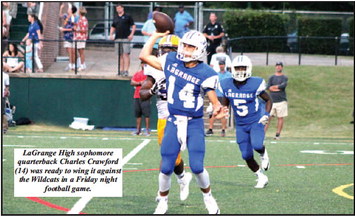 Mecose Todd got good and comfortable.

The Villa Rica sophomore speedster scored three touchdowns (one of them on special teams) to spark the Wildcats to a 50-0 win over LaGrange High on Friday night in an obvious football mismatch at Callaway Stadium.

Todd, the 6-foot, 200pound man-child, spared no words after the blowout.

“We won the physical battle. Our offensive line blocked, and the running backs made plays. La-Grange was not ready,” said Todd.

On the night, Todd rushed for touchdowns of seven and eight yards, both in the first quarter. The Villa Rica Wildcats outscored LaGrange High, 20-0 in the first period of play.

Todd also opened up the second half with an 85yard kickoff return for a touchdown. LaGrange High had no answers to all of the Wildcat speed. Villa Rica scored three more times in the first half on a Phillip Zackery 15-yard touchdown run, a Dushante Holloway 6-yard jaunt and a 60-yard scamper from backup quarterback Noah Best with 2:16 left in the second quarter.

“We started off fast. We have improved a lot between our first and second games. We out-executed them, and we out-efforted them,” said Villa Rica head coach Rico Zackery, the former Georgia Southern safety.

The Wildcats also scored a defensive touchdown with eight seconds to go in the first half. The Villa Rica lead grew to 41-0. The next Wildcat touchdown would come on Todd’s kickoff return in the third period.

LaGrange High was badly outplayed all night. The Grangers were limited to 97 yards and four first downs. The Wildcats owned the line of scrimmage with their 289 yards rushing and 13 first downs.

It was embarrassing for the Grangers, who are scoreless in their first two football games of the year. Callaway and Villa Rica have outscored LaGrange High, 76-0.

“It’s fundamentals. We have some personnel issues. We’re trying to do too much,” said Granger head coach Dialleo Burks. “We had six penalties in the first seven minutes (against Villa Rica).”

Crawford and LaGrange High are still ailing with an 0-2 record. But the Grangers haven’t quit, and they say they aren’t going to.