GDOT Updates Rotary On All Their Ongoing Projects In The Community 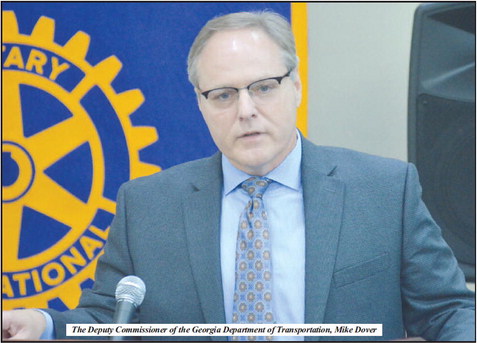 The Rotary Club here in LaGrange and Troup County are continuing on their path of excellence in reporting on the news of the day by keeping their members informed on all of the current happenings here in the community. Between fundraisers, meetings, and charitable events,the club is constantly on the move and trying to keep their members up to date on any and all things LaGrange. At their meeting this past Wednesday, August 30th, the group had a very large crowd for a presentation on a very hot issue in the news right now, that being all of the various projects that are happening with the Georgia Department of Transportation.

Mike Dover has been with GDOT for over 29 years now. In 2015, Dover was appointed as the Deputy Commissioner of GDOT, a very high position. In that position, Dover is responsible for seven districts and any and all major projects flow through him. He was also a key player in the Transportation Investment Act (TIA), a 1.5 billion dollar program. In his time with Rotary, Dover would not only go over all of the major focuses of GDOT, but would also talk many specifics to LaGrange and Troup County and the various things that the State has planned for roadways that will affect each and every one of us on a daily basis.

This year, GDOT’s budget reached 3.5 billion dollars. That is a huge sum of money that is to be spread out across the state for many different projects. A lot of the funds are there in large part to the passage of House Bill 170 which went to provide additional revenue necessary for funding transportation purposes in the state. In the realm of our community, he touched on the Hamilton Road widening project which is about to pick up steam as well as the Greenville Street Bridge which should be letting in 12 to 18 months. He also touched on their numerous programs across the state, the fact that all mowing on Interstates are now contracted out, and he even touched on the bridge collapse in Atlanta. It was a thorough and prominent presentation.

This was an event that was very well attended for the club and something that has been a great interest to many around the community. With all of the new infrastructure coming our way, our roads have to be up to speed and ready to handle all of the increase in population that will be happening here in La-Grange and Troup County. It is great to know that the state department of transportation is still making sure that we are capable of having safer and larger roadways and bridges to face the coming years.

LaGrange Police are investigating a late-night shooting incident where gunshots were fired into a...

Never count out the Orioles. They always have a rally on the back burner. In Tuesday night action...

COVID-19 vaccines are now available for children under 5 years old, and the American Medical...

The City of Hogansville will host a called city council meeting on Thursday evening to appoint an...