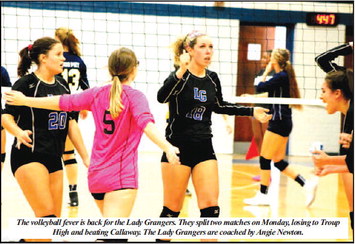 They have a new coach and the same old volleyball persistence.

Troup High can still play this game and did on Monday afternoon with a sweep of county rivals LaGrange and Callaway. The Lady Tigers won their 12th and 13th matches of the season for coach Leigh Bailey.

With a lot of floor burns and some high profile volleyball from the net to the service line, Troup High defeated the Lady Grangers, 25-18, 26-24 in the LHS gym. And for an encore the Troup High Lady Tigers whipped Callaway, 25-10, 25-14.

It was a good day all the way around for Troup High.

“We were playing with hustle and intensity. We’ve been on a rollercoaster this season, but we’re on an uphill swing (now),” said Bailey. “We’re hitting more consistently, and we’re digging better.”

The Lady Tigers needed everything in their volleyball arsenal to beat La-Grange High. The Lady Grangers had the first set tied up three times at 1111, 12-12 and 13-13. La-Grange High also had the second set all knotted up on six occasions, including at 20-20 and 23-23.

“We had some good blocks, and we were making our passes. This was all about having fun, and we had some energy,” said Ke’Tara Birt, the 6-foot-2 middle blocker for the Lady Grangers.

LaGrange High head coach Angie Newton had her team playing at a high level in both sets against the Lady Tigers.

“Anytime LaGrange and Troup play, it means something. I’m proud of the way we played. Jaiden (Gill) stepped up. We made a few little errors, but we played a lot better,” said Newton.

Troup High finished off this rivalry win anyway. The Lady Tigers got 16 digs and six kills from junior Regina Hernandez. She could dig that.

“We communicated and worked our fundamentals. We trusted each other,” said Hernandez.

Sophomore middle blocker Kate Moore also gave Troup High some superior play at the net. She did some spiking and some winning.

“We worked together. We’re like a (volleyball) family. We have a lot of good hitters and passers,” said the 5-foot-11 Moore.

The Lady Tigers also got 16 assists and one block from sophomore setter Kyla Bailey. She had 11 assists and two aces in the match against Callaway as well. Hernandez had four more service aces against the Lady Cavaliers. Junior Grace Ingram brought her volleyball game, too, for Troup High with three digs.

Freshman outside hitter Landen Sheets displayed an all-around game as well for the Lady Tigers with three aces, four kills and two blocks.

LaGrange High got back on the court, too. In the volleyball nightcap, the Lady Grangers rallied for a 2510, 25-22 win over Callaway High. Senior setter Madison Lewis led the Lady Grangers with some big hits and key service aces.

“We were motivated coming off the loss (to Troup High). We were serving and passing. We had some high energy,” said Lewis, who’s on the recruiting “watch list” at Brewton-Parker College and Point University.