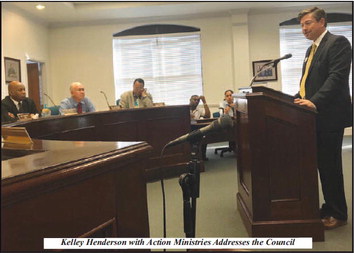 The City Council and the Mayor here in LaGrange had a very packed agenda this past Tuesday night, September 26th, with a full auditorium of people to go with it. The last City Council meeting scheduled for two weeks ago was cancelled due to the inclimate weather of Hurricane Irma. As such, the group has been working extremely hard, even touring the grounds of the new Great Wolf Lodge that morning after their work session. After the prayer and the pledge that night, the meeting was underway.

That night, the city had three separate delegations of different groups wanting to share the work that they are doing with the Mayor and Council. The first of these was Kelley Henderson with Action Ministries. Born in the trunk of a pastor’s car in 1963 in Atlanta, Action Ministries has been working for years to help those on the fringe of society recover and put their lives back on track. In recent years, the group has started becoming involved with LaGrange, specifically with Wanda Walker, and has already helped many people that were homeless find places to live and even jobs. The movement is growing here in the La-Grange/Troup County community.

Kimberly Dixon was also on hand that night to speak out on a movement that she is beginning titled Stopping the Violence, a new type of march or parade that will highlight violence in the community and the call to stop it. Several families have people pass away due to violence and in many cases, these individuals did not have life insurance. The group will donate funds from the event to families that have lost loved ones for burial costs or insurance purposes. The other delegation that night was the owners of Nutwood Plantation and their request to start a private cemetery on the grounds. There will be more discussion on this in future meetings.

The Mayor and Council then voted on a request to abandon an alley lying between Broome and Margarite Street. The city has no plans for this area and a public hearing has been called for the Council meeting on October 10th.

Under resolutions, the Mayor and Council had two items to deal with. The first motion that was carried involved declaring certain property as surplus and authorizing terms of sales. This deals with property at Lafayette Parkway and E Render Street. The other agenda item that night authorized the Mayor to execute an agreement with the Transcontinental Gas Pipeline Company. This motion was carried as well.

The last thing that the mayor and council accomplished that night was moving the date for the second October meeting. The Council was scheduled to have their meeting on Tuesday, October 24th but due to several members of the council attending Chief Lou Dekmar’s ceremony and promotion within Interpol in Washington D.C., the meeting has been re-scheduled for Thursday, October 26th at their regular time.