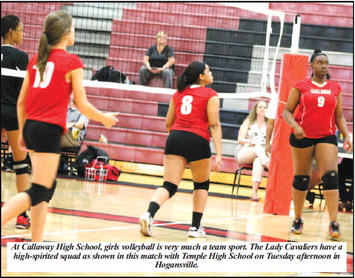 From the hallways of Callaway High School to the volleyball hardwood, the Lady Cavaliers are making strides, scoring points and learning by way of trial and error.

Callaway High is winning a few, losing a few more, and the Lady Cavaliers are getting into the volleyball mood. Callaway High is taking the fight to every opponent, and the Temple Tigers and the Columbus Jordan Red Jackets are among them. The Lady Cavaliers still lost a pair of Area 1-AA matches on Tuesday afternoon, via a 13-25, 17-25 verdict against Temple, followed by a 1125, 17-25 setback to Columbus Jordan in the matches at Hogansville.

Coach Christina Harris’ Callaway High team played some stifling good volleyball at times, and then there were those other times. But by no means is this a bad Lady Cavalier team.

“I like the way we fought back. I see improvement. Our hits are a lot better, and our setters are working. We have a lot of new players, and we’re learning,” said Harris.

The Lady Cavaliers, 2-4 in the area and 3-11 overall, were in full volleyball view in the matches versus Temple and Jordan. Callaway High was not intimidated. Senior setter Alicia Marks served the Lady Cavaliers to an early 3-1 lead in the first set against the Temple Tigers.

“We are talking more and playing with more energy. Our hitting is pretty good,” said Marks, the 5foot-9 co-captain for Callaway High. Marks and CHS kept striving, setting and busting their volleyball guts. The first set against the Tigers was tied at 3-3 and later at 4-4 prior to a late surge by Temple. Along the way, Callaway High scored off of some serves from senior Tyghaza Lindsey. The Lady Cavaliers served up some more points with Marks in the second game against Temple. The second set was tied at 2-2 and 3-3 before the Tigers hit a hot streak with junior outside hitter Drew Cobb, and seniors Brittany Shivers and Naomi Peeples.

“We’ve had a lot of practice, and we’re getting better. We had some good passes, and we’re staying positive,” said Cobb.

The Lady Cavaliers had some bullish net play and some cohesion all over the court with Sheppard (five kills, three blocks), Abby Hammock (seven assists) and Gholston (one service ace).

But the Red Jackets finally took over with a 138 lead. Jordan also outscored Callaway High, 12-9 down the stretch in the second set.

“We still have the potential to win, but it’s hard when they (the opponent) start racking up the points. We had some good digs, but our feet were glued to the ground (too often). We need some encouragement,” said Lady Cavalier sophomore Kelsey Wessinger.