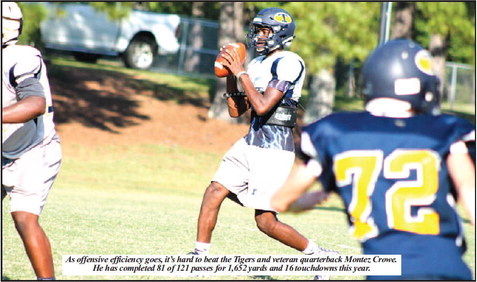 Troup High has one of those nightmarish challenges this evening as the No. 8-ranked Sandy Creek Patriots pop into Callaway Stadium for a Region 5-AAAA game with the Tigers. This will be a mid-term exam for the Troup High team (5-0 overall, 1-0 in the region).

The Tigers and coach Tanner Glisson are still in the process of finding out exactly how good they are. Sandy Creek will help Troup High decide on that.

“Sandy Creek has won some state championships. They are very sound, and their defense is fast. They have tradition, and Friday night will tell a lot. Our receivers against their defensive backs will be a good matchup,” said Glisson.

The Patriots, 3-1 on the season and yet to play a region game, will come into the tilt with a chip on their shoulder. Glisson knows why.

“Last year we beat them for the first time in (our) school history,” said the Troup High head coach.

The Tigers fully expect to make it two years in a row over the Patriots tonight with the 7:30 p.m. kick off at the ball yard in LaGrange.

But Troup High might very well have to put this game on ice in the fourth quarter, if they can. This region tussle might not be decided until the last period of play.

Troup High sophomore playmaker Jarell Smith is ready for a rumble at the stadium, too. Smith would be disappointed with anything less.

And the Tigers are very ready.

“We’ve been working on our simple plays and our trick plays,” said Smith, who has 14 catches for 207 yards and two touchdowns this season.

Junior wideout Jamari Thrash is as fast as country lightning, too, for the Troup High Tigers. Thrash, Mr. Excitement, is one of the most dangerous receivers in the region with 21 catches for 569 yards and seven touchdowns.

The Patriots also have junior halfback Cameron Cruver at their football disposal. Cruver is averaging six yards per carry.