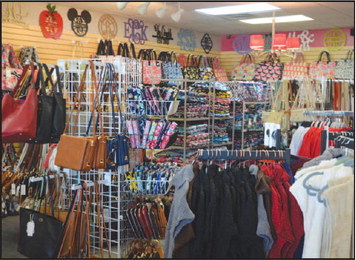 Local business is continuing to take off here in La-Grange and Troup County. With Great Wolf quickly on the way, the new downtown hotel slated to open in November, and many other businesses arriving or either expanding, there has never been a better time to do business in La-Grange. This past Friday afternoon, October 27th, a local business that has been established in the community for several years, hosted a ribbon cutting at their new facility located at 380 S. Davis Road, the same plaza as Mama Goldberg’s. That store was Serendipity.

Serendipity was started in 2004 by Janet Gilbert and her daughters, Cresta and Claire. With several locations and nine franchises, the store has grown immensely in its popularity. Nine of the franchises are independently owned and operated and several other locations are still owned by Janet and her daughters. This new location on S Davis Road is one of those locations. Other stores include areas such as Griffin, Thomaston, and other towns in Georgia. It has become a major name in LaGrange for several reasons, including incredible customer service.

Serendipity is your one shop location to add a personalized touch to all of your gifts, no matter the time of the year. From travel to tumblers, purses, rain gear, toys, and vinyl creations, Serendipity is the place to be. They are also experts in monogramming, giving personalization a new meaning to display individuality and uniqueness. Currently, their Halloween bags and gear are on full display but the team is already beginning to lay out their supplies and decorations for Christmas. The store was beautifully arranged and ready to shop when members of the chamber arrived that afternoon.

The LaGrange/Troup County Chamber of Commerce and several of its dignitaries were on hand that afternoon as they gathered out front of the new location to cut the ribbon, officially welcoming the new location to the chamber ranks. This is another in the long line of businesses coming to the community, with several more planned for the chamber and their team throughout the end of the year.