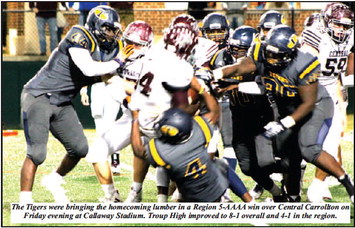 It was a Montez Crowe kind of night. Not only was the Troup High senior quarterback named the homecoming king on Friday night, Crowe also led the Tigers to a 35-14 shellacking against Central Carrollton in a Region 5-AAAA football game that had its fair share of highlights and suspense.

Homecoming corsages were on the line, as well as one more entry into the Troup High football record book. On this night, Crowe would reach the 5,000yard mark for career passing.

Good ol’ No. 15 for the Tigers was almost having an out-of-body experience. Crowe had never had a night or a game like this one. Crowe was wearing a smile from the football huddle to the homecoming king’s throne.

“Our offensive line was blocking, and our receivers were making plays. We were hungry, and we had a good week of practice,” said Crowe. And just seven days before thrashing Central Carrollton, Troup High lost to Cedartown, 21-18 in a huge upset at Cedartown.

“One loss can’t bring us down,” said Crowe. Tiger teammate Joco Willis, the junior linebacker, was reading the same tea leaves. Willis and Crowe were back believing in this Troup High team, which is now 8-1 on the year and 4-1 in the region.

“We set the tempo, and we made some stops (on defense),” said Willis. And offensively, the Tigers simply put the ball in the big, steady hands of Crowe, the 6-foot-5, 200-pound playmaker. In this homecoming game, Crowe was riding on a wing and a prayer. Crowe was also throwing two touchdown passes to junior wide receiver Jamari Thrash on a 15-yard route and a 12yard pass – both in the first quarter.

Crowe also rifled the ball to Tiger sophomore Jarell Smith for a 4-yard score in the second period. Crowe went the touchdown route for the fourth time on the night on a 20-yard pass to Troup High sophomore split end Kobe Hudson in the third period with 7.7 seconds left.

The Tigers were giddy, exuberant and on top, 357. Troup High also scored on junior running back Tyree Carlisle’s 13-yard offensive burst in the third period. Carlisle rushed for 76 yards on nine carries in the Tiger homecoming triumph.

“This was about bouncing back (from the loss at Cedartown). We went back to fundamentals. We got people on the ground. We executed, and Central Carrollton is not a bad team. They played with a lot of effort,” said Troup High head football coach Tanner Glisson.

The Lions (3-6 overall, 1-4 in the region) scored in the second quarter on a Landon Schulenburg 17yard touchdown pass to senior wideout Josh Mc-Clendon. Central Carrollton would score again in the fourth quarter on senior linebacker Tyree Blocker’s 65-yard fumble return.

Central Carrollton also got 110 yards passing on the night from Schulenburg, the junior. He was 9-for-15 through the air. The closest thing to a reliable running threat for the Lions was senior tailback Malcolm Brown with 39 yards on 23 carries. The Tiger defensive line and linebackers were laying some licks on the Lions.

“We struggled up front. The Troup guys were bigger and stronger. We expected to see an explosive team, and Troup played like its hair was on fire,” said Central Carrollton head coach Darius Smiley. “We played to the final buzzer, but Troup outmanned us.”

The Tigers can do that and did with Montez Crowe, the homecoming king, leading the way.