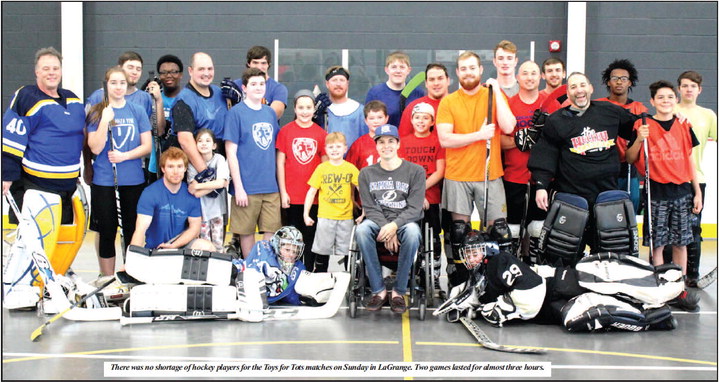 Brett Miolen, the former University of Rhode Island ice hockey player, has made another lasting memory.

It didn’t come on the college ice either. Miolen’s latest hockey feat came on the hard playing surface at the Mike Daniel Recreation Center on Sunday afternoon.

What Miolen did was score the game-winning goal in a Toys for Tots match in the LaGrange Street Hockey League. Miolen and the Red Wings topped the Blues, 6-5 in a wild and unnerving adult hockey match.

It was a game that Miolen will never quite forget.

“This was my first winning goal (in LaGrange league play). I got fired up. I even head butted somebody. I’m slow, but I have a wicked shot,” said Miolen.

He tapped in the gamewinner, thus breaking a 55 tie, thanks to a perfect pass and assist from Red Wings teammate Joseph Shaw.

“Everyone wanted to pull the ‘W.’ Everybody wanted to win. It was tough, and we went all out. It was intense, and Brett (Miolen) has some heart,” said Shaw.

But none of it could have happened for the Red Wings without the Shaw 8-foot pass in the closing seconds of the hockey match.

“This mattered, and everyone brought his ‘A’ game. We want to win every game,” said Shaw. “We played with a meaning, and we had the crowd (behind us).” The Red Wings also had goaltender Glenn Cunningham on their side. He made his fair share of saves.

“We have a little kid in each of us. Everybody wants to be a hero. We want to do the best that we can. We are making better passes, and that is a sign of maturity,” said Cunningham.

Even the Blues played just about good enough to win. This street hockey match did feel different on this day.

“It felt like a real game. This didn’t feel like a pickup (match). There was a lot of rubbing in the corners, and we played hard,” said Paul Bono, the ex-Boston University ice hockey player and the Blues goaltender. “We have a brotherhood (in the LaGrange league).”

Matthew Gordon, the 16-year-old player from Thomaston, could feel the hockey intensity, too.

“I enjoy the speed (of the game). This takes commitment, and you have to bust it on every play,” said Gordon, who also plays high school football for Upson-Lee.