Together The Tigers, Glisson Have Changed Their Football Culture 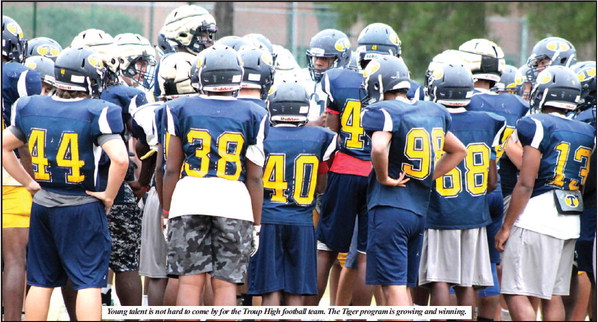 No doubt, some team goals are still out there.

Troup High still seeks a Region 5-AAAA championship and a state crown. But what the Tigers are most proud of during the last three years is changing the football culture from a notorious loser into a prominent winner.

With coach Tanner Glisson and a group of guys who are buying in, Troup High is now a highly respected program. The Tigers have been transformed from a 1-9 team from two years ago to a state playoff team during the last two seasons. The Tigers are a West Georgia football phenomenan.

“A lot of people said this couldn’t be done,” said Glisson, who has rolled up his sleeves and has shown Troup High how to win football games.

In the last two years the Tigers have posted a 17-6 record, and they have been out there on the field in three state playoff games. The future looks bright for Troup High football.

“We are relevant on a regional scale and a state scale. It is good to know that when you get on a bus (for a road game) you have a chance to win,” said Glisson.

And why do they have this winning mentality over at Troup High now?

“We have kids who are willing to sacrifice. We have continuity with our coaching staff. We compete every single day. We play hard, and we’re one of the better teams in quad-A (football),” said Glisson.

Just this season the Tigers went the 9-3 route with two state playoff games and one postseason win. Troup High won with a prolific passing game and a relentless defense this year.

“We have a work ethic and expectations. Our kids are getting bigger, faster and stronger. We expect to win. The weight room has helped a lot, and we have some Division I players,” said Glisson.

Tiger senior quarterback Montez Crowe, after a record-setting season with 3,984 yards passing and 40 touchdowns, has many scholarship offers on the table. He is still trying to decide.

Sophomore wideout Jarell Smith will be back next year for the Tigers, too. Smith was on top of the action with 18 catches for 274 yards and four touchdowns this season. Smith averaged 15 yards per catch.

Junior defensive lineman Josh Boehm will also be back for the Tigers with starting experience and his chinstrap buckled up.

“It’s extremely exciting. We expect our players to wake up every morning and give 110 percent (in class and in the football program),” said Glisson. The Tigers hope to get better every day.