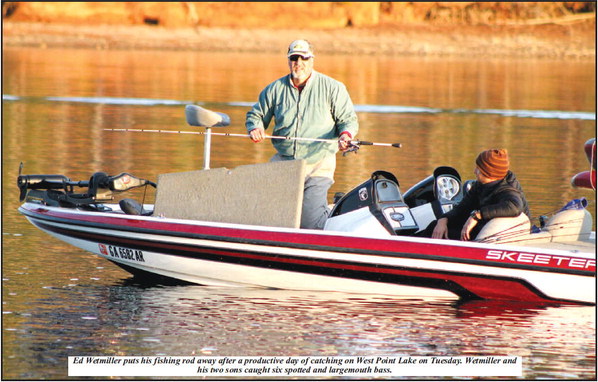 Leave it to Santa Claus. Ed Wetmiller of Tyrone did that, and he did not regret it.

Due to the ultimate giver of gifts, the man with the rosy cheeks and the white beard, Wetmiller spent some time with his two sons on West Point Lake on Tuesday. The father and sons could not have had a better time either.

“This was my Christmas present, and this is the lake to go fishing in,” Wetmiller said of West Point.

While too many other anglers were catching nothing but chills, Wetmiller and his sons got re-acquainted. They shared some good times. They had some laughs.

They had some down time and some fun, courtesy of the lake, the rainless weather and Santa Claus. The fish were biting, too, for the Wetmillers.

But that wasn’t all the father and sons were out there for.

“It was just nice to get away. But we were bass fishing, and we lucked into them,” said Matt Wetmiller, who now lives in Lakeland, Fla.

His brother, Brian Wetmiller, was onboard the boat, too. He lives in Senoia, Ga. But on Tuesday morning and afternoon all three Wetmillers, the father and the sons, were relaxing and catching bass.

They pulled in six largemouth and spotted bass. Soon after daybreak the Wetmillers started to catch some West Point Lake bass.

“We caught a couple of two-pounders right off the bat (in the morning),” said Ed Wetmiller.

The father and sons would catch four more bass during the day, and they had numerous fishing bites.

“We were bass fishing, and we were getting excited. Our hearts were beating, and we fished all day,” said Brian Wetmiller.

He and his father and brother were fishing in water between five and 10 feet. They were catching bass, too, not just talking about it.

“We were fishing with Carolina Rigs,” said Ed Wetmiller, who really enjoyed his final Christmas present of 2017.