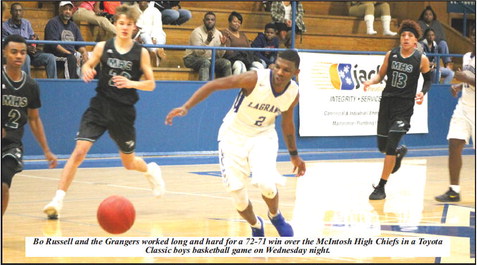 The McIntosh High boys basketball team ran onto the court with the No. 6 state ranking, and the Chiefs left with a 72-71 loss to the Grangers in the first round of the Toyota Classic on Wednesday night.

LaGrange High put up a defensive road block in the final seconds as the Grangers held on for the win. It could have been very different, but it wasn’t.

“We showed our competitive nature. I’ll take it. This game could have gone either way,” said Mark Veal, the head coach of the 7-4 Grangers.

The coach liked what he saw in the final minutes of the game.

“We shot well, and we adjusted our defense. We hit a big shot in the corner. This was a good win,” said Veal.

His boys were on the cusp of blowing out the state ranked Chiefs as late as the 6:22 mark of the third quarter. The Grangers took a 16-point lead at 4327 after a layup from senior guard Bo Russell.

But McIntosh High then went on a 20-3 run to take a 47-46 lead. Senior guard Garrett LeClaire scored on a putback for the Chiefs, and McIntosh High junior Naj Ashley-Emory sank a three-pointer from the baseline with 1:16 left in the third period.

The teams exchanged leads from then on until the final buzzer. With 35 seconds left in the third quarter, LaGrange High took a 51-50 lead on a Russell one-handed flying dunk. The Chiefs watched and grimaced.

“We were intense, and we finished. We wanted it more than them,” said the 6-foot Russell, who had a game-high 29 points.

Granger senior forward Daz Williams then banked in a 5-foot jumper to give LaGrange High a 53-50 lead with the third period coming to a close. But McIntosh High responded with a pair of buckets from 6-foot-1 junior guard Bruce Carpenter in the fourth quarter.

The Chiefs took a momentary 54-53 lead. Williams tied the game for LHS at 54-54 with a free throw at the 6:15 mark of the final period of play. Russell then canned two foul shots 14 seconds later. The Grangers were on top by two points.

Covan Huzzie, the senior guard for LaGrange High, also canned two foul shots coming down the stretch. But the Chiefs had something left with a Carpenter layup and two Garrett LeClaire free throws to take a 59-58 lead with 4:07 left.

LeClaire would also score on a fastbreak layup with 3:41 remaining to give McIntosh High a three point lead. But Daz Williams tied the game for the Grangers with a three-pointer. Huzzie than swished through another three-pointer to hand the Grangers a 64-63 advantage with 2:54 left.

“The game went back and forth, and we played a lot harder in the second half. But LaGrange is very athletic and well coached,” said coach Jason Eisele of McIntosh High School (61).

With a Garrett LeClaire putback the Chiefs nabbed a 65-64 lead. Sophomore forward Earley Sanders would then deadlock the game for the Grangers with a free throw. And in the final 1:21 of the game, LaGrange High got another three-point bucket from Huzzie.

The Grangers held on, thanks to a free throw from Russell with 8.4 seconds left.

“It was win or lose. We were going hard, and we were dominating,” said Huzzie, who knocked down 14 points on the night.

Bo Russell of LaGrange High then untied the game with his free throw in the final seconds. McIntosh High left with a stinging defeat.

“We didn’t finish, and we didn’t make the right plays at the end,” said Guenther, who is being recruited by Virginia Military, Radford and The Citadel.