Shaw Goes On A Seven-Goal Frenzy; LaGrange Hockey Player: “I don’t like losing.” 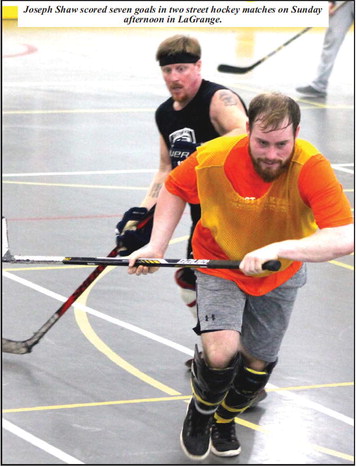 Go ahead and name the Sunday, and he is going to be there.

Joseph Shaw doesn’t miss one match on any weekend in the LaGrange Street Hockey League. Shaw is hooked like a 100-pound blue marlin. Playing two hockey matches every Sunday has become habit-forming for Shaw.

The red-headed Shaw is always right in the middle of the jawing, the shooting, and the defending. Shaw knows how to play this game, one power play at a time.

He does not back down. Ever.

“You can’t be stingy, and I don’t like losing. These games are something that I look forward to. I’ve got some drive,” said Shaw.

Okay, so he does. Shaw went out on Sunday afternoon and scored seven more goals in a street hockey doubleheader at the Mike Daniel Recreation Center.

There was more of the same on the floor. Brett Miolen rifled the hockey puck into the net for five goals in two matches. Miolen also scored the first goal of the afternoon.

“This is fun, and everybody out here is learning how to play (hockey). We are getting a lot more competitive. We are turning into some real hockey players,” said Miolen. “Hockey is all about chances. You have to get into position to either pass or take a shot.”

Jordan Shaw, the younger brother of Joseph Shaw, was worthy of the hockey net, too, in league play. The 18-year-old Shaw went on a scoring tangent with four goals in just one period of play on Sunday.

These matches are much more than just for personal glory for Shaw.

“This is exercise, and the players are family. But we still get roughed up and beat up. Scoring is all in the wrist. I know how to take some good shots,” said Shaw.

All of the players – men, women and youth – bring their physicality to every period of play in the street hockey league in LaGrange.

“This is about competition and contact. The games are very intense. You have got to put some power into the shots. You can’t be afraid,” said goaltender Glenn Cunningham.

He had 30 saves in only one of the two matches over the weekend.

“The players are learning how to get into position. Even some of the girls are checking guys into the boards,” said Cunningham.