Street Hockey League Is Catching On; Cunningham: “The players keep coming back.” 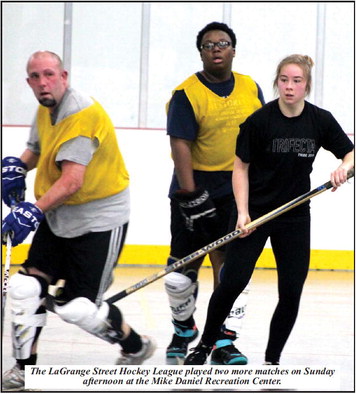 Later this year the La-Grange Street Hockey League will turn five years old, with or without the birthday cake. The ice cream is extra, of course. That is a pleasant surprise for the hockey league cofounders, Brett Miolen and Glenn Cunningham. Both of the hockey diehards keep on teaching, playing and encouraging their still relatively new players.

Street hockey is no longer a fad in LaGrange. It is a viable alternative when it comes to recreational sports. The hockey gear is always available, wooden sticks as well.

“The players keep coming back. With one more Sunday the players are still coming. This gives us hope for the future. We want to have hockey in LaGrange. This fills a niche,” said Cunningham. The league attracts as many as 21 players each Sunday to the Mike Daniel Recreation Center. There is a rink, there is enthusiasm, and there is a steady flow of new players.

Lindsey Vedrenne is one of those hockey converts. She is getting to know the game, and she plays as hard as any of the street hockey guys in LaGrange. Vedrenne is 23 years old, and she knows how to dish out some hockey pain.

She did that again on Sunday afternoon in the hockey league twin bill. These West Georgia hockey enthusiasts always play two matches every Sunday in LaGrange from 2 p.m. until 5 o’clock. Vedrenne is starting to look at home in the games, all of which are bruising and sometimes bloody.

“This is fun, and it’s a good workout. You have got to have a lot of hustle and heart. We are always going,” said Vedrenne. The hockey puck is flying.

The hockey puck is flying up to 70 MPH. Kolby Smallwood’s face caught one of those shots on Sunday. Smallwood got some ice bag treatment for a few minutes. He then returned to the game.

This is a highly competitive league. Winning is the bottom line, and it is not the only reason these street hockey players meet each Sunday in LaGrange.

“You need to have conditioning and hand-eye coordination. There is a lot of teamwork involved, and we have fun,” said Smallwood.

Brant Smith is one of the league’s new players.

“I come out here for the cardio and the camaraderie. The games are fast-paced. You can go from defense to offense in just a few seconds. You have got to have the team mindset,” said Smith. “You have to practice, and you have to study the game.”

Smith scored twice on Sunday. He has a quick hockey stick.

Landen Gogel, one of the youngest local street hockey players at 11 years old, is catching on, too. He is a goaltender and a creative one. Gogel has good timing and a feel for the game.

He is a grinder and a defender of the net.

“This is more of a challenge. You need coordination and strength. I love the games, and I know all of the guys (and girls),” said Gogel.