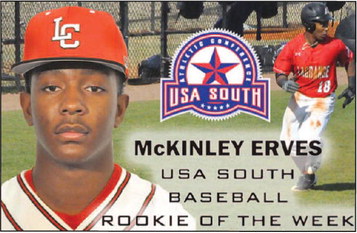 Freshman designated hitter McKinley Erves was selected as the USA South Baseball Rookie of the Week for the week ending Feb. 25.

Erves went a combined 7-for-14 (.500) with a .786 slugging percentage and .556 on-base percentage in four games. He had four runs scored, four RBIs, two doubles, a triple, three walks and two stolen bases. In a 10-6 loss to seventhranked Birmingham-Southern, Erves was 2-for-4, including a triple, score two runs, and had an RBI. In a three-game USA South series against Covenant, he was a combined 5-for-10 with two runs scored, three RBIs, two doubles, three walks and two stolen bases. For the season, Erves is second on the team with a .313 batting average and tied for second with 11 RBIs.