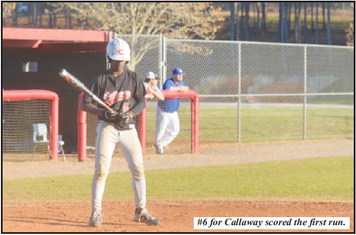 LaGrange and Callaway JV baseball squared off in a double-header Thursday, March 15th at 5:00PM. The Granger JV team, aiming to avenge their varsity brothers who fell to the Cavaliers 5-0 earlier in the season, proved themselves worthy in a dominant 7-2 showing in the second game.

Defensive errors in the first inning for the Cavaliers put the Grangers at an early 3-0 lead. LaGrange outplayed a flustered Callaway team who failed to demonstrate knowledge of even the basics of baseball. LaGrange capitalized on overthrown balls, drops, and Callaway’s overall inattentiveness in order to walk and steal the bases at will.

An undeterred Callaway offense came to bat at the bottom of the first looking to close the gap. #14 Cavander for the Cavaliers wasted no time in putting the game within reach for Callaway, hitting a triple that ultimately put two runs on the board.

The Grangers proceeded to put the game comfortably out of reach before ultimately finishing 7-2. The whole Granger squad came together for the win. Christopher Marable gave his best for LaGrange while Sam Asbell, unable to play because of injury, provided support from the dugout.

LaGrange coach Craig Mobley had few words to say, mentioning only that the Grangers pitched a great game and hoped to improve their performance moving forward.

For the Cavaliers, Thursday night’s game highlights areas in which the stillyoung team seeks to improve. In this regard, perhaps experience is the element the Callaway bunch lacks most. The Cavaliers managed to shore up major defensive issues after the first set of innings, but preventable errors made early on proved too much for Callaway to overcome.