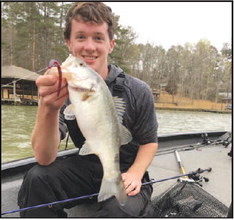 While many were celebrating Saint Patrick’s Day and wearing green Saturday, two local Callaway High School students were competing in the GICAA State Fishing Championship on Lake Sinclair. Congratulations to anglers Matthew Freeman and John Reed Batchelor of the Callaway High School Fishing Team for placing fifth in the tournament.

These two did an exceptional job of adjusting their on water approach in a response to constantly fluctuating weather conditions that left most anglers in the tournament frustrated. The top placing teams were separated by just ounces. As a partnership of the two anglers, this was their highest placement to date. They placed eighth in the Georgia BASS Nation tournament at Lake Oconee in 2017 and Freeman is the 2016 Georgia State Open Bass Champion.