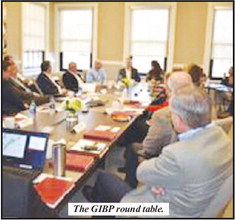 Business leaders gathered together this past Thursday, March 22nd, to discuss the new Georgia International Business Park. This 10,000 acre business community is Georgia’s largest sustainable business park, and no development was necessary. LaGrange was already home to the businesses and the infrastructure that makes up the GIBP. Connected by the Ray C. Anderson Memorial Highway, the GIBP encompasses businesses such as Kia, Interface, Milliken, Groundswell, and many other large manufacturers.

The idea for the Georgia International Business Park was born from a loss. La-Grange lost a project to Griffin, Georgia, and after looking things over, Kelley Bush of the City of La-Grange Economic Develop ment Office realized that one of the major factors was sustainability. With many sustainability projects already completed and in the works like The Ray, The Thread, and recycled tire paving, LaGrange was on its way, but there was room for improvement. That’s where the GIBP came in. Scott Malone, President of the City of LaGrange Development Authority, said that the GIPB is all about long term sustainability, “We’re going to be the premiere sustainable business community in the state of Georgia”.

Many industry leaders spoke about what their businesses are doing in sustainability and what it means for the city. Executive Director for The Ray, Allie Kelly shared their success with the 18-mile sustainable highway, which has turned the attention to LaGrange in transportation ecology.

Michelle Moore of Groundswell stated that sustainability is becoming more of an investor mandate, not just a marketing ploy. “Sustainability is really about economic competitiveness,” said Moore.

Tom Hicks, who helped build the 2nd generation of LEED, was Energy Star’s portfolio manager, and most recently worked as Undersecretary for the U.S. Navy, shared his experience with sustainability as well. Cofounder of the Mabus Group, Hicks worked with Secretary Ray Mabus to help the Navy’s operations become more sustainable. As ambassador to Saudi Arabia, Mabus saw how volatile the Military’s reliance on oil was firsthand. Hicks said after seeing the oil crisis, they decided, “We’re going to use energy… to reduce our costs and make us better war-fighters”. Their goal was to garner half of their energy from alternative sources. Not only did they meet their goal, they surpassed it, saving about $400 million in energy costs in two years. Mabus Group was formed to help other large businesses with corporate sustainability. “Our focus is on resiliency, energy, sustainability, cybersecurity, and talent,” said Hicks. Hicks also said that if a company fails to make these items a priority, they lose their ability to attract top talent.

Sentury Tire, a $530 million local venture that will bring more industry and jobs to the LaGrange area, is looking into sustainability for their tire production. Rami Helminem, Sentury Tire executive vice president and CEO for Sentury Tire North America, shared his concerns that solar and wind power would not sustain the 24-hour operation of the factory. Helminem stated that they were looking into Biomass, which is organic matter used as fuel, but gas and electric are so cheap here that they may end up paying a premium for the renewable resources. Tom Hicks said that with using alternate fuels, “You shouldn’t hope to save money, you should expect to save money”. The GIBP has paved the way for businesses to help one another to be more sustainable.

Businesses like Interface have worked to stay on the cutting edge of sustainability with their Factory as a Forest initiative. Though Milliken is a direct competitor to Interface, both companies were present. This cross-collaboration shows the common goal of the GIBP to better LaGrange.