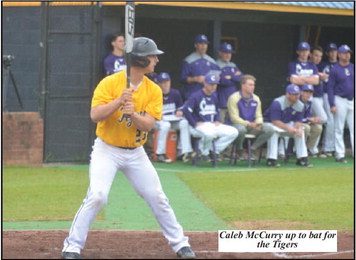 The Troup High Tiger baseball team hit a stumbling block in Friday night’s game against the Cartersville Hurricanes. The Canes tore through Tiger Field, leaving a scoreless Troup team in their wake. The Tigers fell 5-0 in the first matchup between the two region powerhouses.

Both teams entered the game undefeated in region play. The Canes, loaded with next-level talent, scored an early-home run. Their lead would only extend from there.

They were ultimately unable to convert.

“I think we left probably nine or ten men on base,” Troup coach Craig Garner said after the game. “We just never could get a big two-out hit.”

With a 12-5 record on the season, the Tigers aren’t accustomed to losing. But Troup, equipped with more than their fair share of talent, need not dwell on Friday night’s game. The Tigers will get a chance to avenge themselves at Cartersville later in the season.

Until then, Garner expects his team to stay on their grind.

“The things we have to correct to help ourselves be successful,” he said, “are: number one, we’ve got to get the ball in play; number two, we’ve got to make a few better pitches in certain situations; and number three is, when we have a base open, we’re not going to let certain people beat us.”

The Tigers continue their season next week with road games Tuesday and Thursday before returning to Tiger field in a home game Friday, March 30.