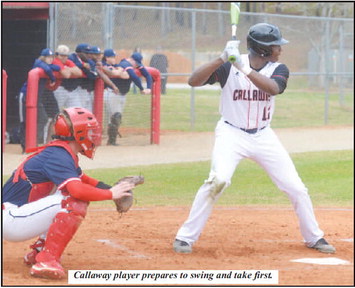 While the Callaway girls soccer team duked it out with Lamar County, the Cavalier baseball team had their own score to settle with the Trojans.

When the Cavaliers took the field Tuesday evening, the weather was comfortably cool, and the fans were eagerly expecting a victory. The Callaway baseball team has performed well all season, and a win over Lamar County would help the Cavaliers in region play. Fans didn’t have to wait long for the action. Callaway roared to a 4-0 lead by the top of the second inning while keeping the Trojans scoreless. The Trojan team proved unable to regroup in the second, looking lost as the Cavaliers dominated in every phase of the game.

Taking bat in the second, Chandler Lott of Callaway lit up the field with a home run that extended the score 5-0. An electrified Callaway team would go on to load the bases.

Things didn’t get easier for the Trojans. Their offense was nonexistent. Their defense was porous. The Cavaliers were able to put an early end to the game by scoring ten runs in five innings.

The Trojans laid a goose egg.

After Tuesday’s game, the Cavaliers improved to a perfect 4-0 in region play. Their dominant showing was a team effort that was assisted in large part to Chandler Lott who pitched a great game with nine strikeouts along with a home run.

Prior to Tuesday night’s game, the Cavaliers had taken a week-long break. Their time off did little to slow their roll, as the Cavaliers returned to the field with renewed vigor.

Callaway seeks to remain perfect in region play. If their game against Lamar County is any indication, they have a good shot.

The next home game for the Cavaliers will be April 3rd against Jordan.

The author of this article can be reached at [email protected] troupcountynews. net