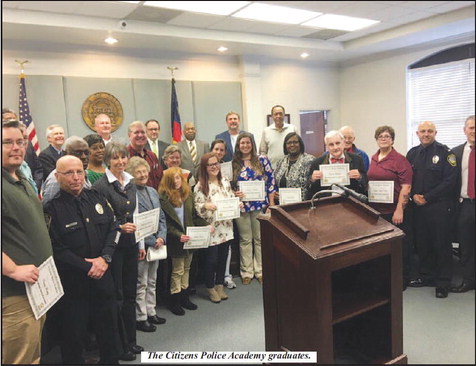 After a long day at their annual day-long work session retreat, the LaGrange Mayor and City Council finished off their day with a short regular meeting Tuesday evening, authorizing an annexation request and approving moving forward with two grant issues. The council also heard from a pair of citizen delegations. The first issue considered during the regular meeting was a request to annex an unused seven-acre property on Gordon Road near Vernon Road into the City of LaGrange.

The request was made by the property owner, Sean Hammett, who asked that the property be rezoned and fully annexed into the city. Hammett requested the annexation because half of the property, one of two parcels, was already part of the city and he would like to unify the property in order to sell it.

Hammett advised the council via letter that he has owned the property for over 30 years and is in the process of selling it so it can see its full potential. The property is also almost entirely surrounded by parcels that are zoned in the city.

The annexation request was unanimously approved by the council.

The council also signed off on accepting a grant from the Callaway Foundation to Troup County Parks and Recreation in the amount of $575,000 for a renovation of the McCluskey Tennis Center.

Accepting the grant came with a few caveats. It is a matching grant, so $250,000 must be matched from other sources for a total of $825,000 for the project. The foundation also requested a future naming opportunity for the facility.

The Callaway Foundation Board requested that the proposed enhancements to the facility be named the “C. Leon Pitts Pavilion” along with a permanent plaque at the McCluskey Tennis Center. The proposal requires both the LaGrange City Council and the Troup County Commissioners to sign off.

Both the grant acceptance and the naming request were unanimously approved by the council.

The council also voted to apply for a Community Development Block Grant (CDBG) from the Georgia Department of Community Affairs in the amount of $750,000.

The funds from the grant would be used primarily to the benefit of low to moderate- income citizens in areas of housing, public facilities, and economic development.

Because of the nature of the grant request, the council held a public hearing on the matter at the start of the meeting, but no one wished to speak for or against the proposal.

The council later unanimously authorized the submitting the CDBG request to the Department of Community Affairs. Along with their regular business, the mayor and council also hosted a graduation for the LaGrange Police Department Citizens Police Academy (CPA).

Mayor Jim Thornton and Police Chief Louis Dekmar presented the CPA graduates with diplomas recognizing their participation in the 10-week class that covered all aspects of policing.

Lt. Eric Lohr, who taught the class along with Officer Jim Davison, provided a brief summary of the course, explaining the topics of study and why the LaGrange Police Department has chosen to offer the class.

Chief Dekmar also thanked the attendees for their participation in the Citizens Police Academy.

The council also briefly heard from a multi-faith organization out of Atlanta. The Faith Alliance group is comprised of members of the Christian, Jewish, and Muslim faiths.

The group chose to appear before the council to show the City of LaGrange that different people of different religions can work together peacefully for a better community.

The author of this article can be reached via email at [email protected] troupcountynews. net.