Mayor and Council Discuss Many Topics at Annual Retreat 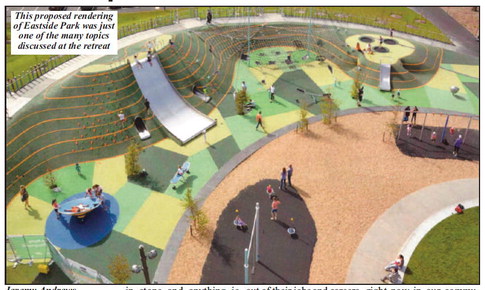 All of the discussion at the 2018 Mayor and Council Retreat is just that: discussion. None of these projects or proposals are set in stone and anything is subject to change.

Each year, the Mayor and City Council of LaGrange find a time, normally a few months before budget preparations, to take a full day out of their jobs and careers to meet in depth for an all day business retreat to discuss several big projects and updates going on around the city. There are a lot of amazing things happening right now in our community and the council’s leadership has been excellent in navigating uncharted territories in terms of growth and expansion. Throughout their retreat, the group discussed many different things and began laying the groundwork for projects both on the horizon now as well as into the future.

The group opened that mornings meeting by previewing that night’s agenda before launching into rapid fire rounds of topics. The first of these included storm water management. There are currently several ongoing storm water infrastructure projects at various locations such as Moore’s Hill, Lakewood, Daniel Street, and Motley Street just to name a few. All of these projects will be beneficial if or when the city faces more flooding issues as it did around Christmastime a few years back.

The next discussion that morning was something that has been discussed by the group within the last year, that being the salary of the Mayor and City Councilors. Compared to other areas our size, the Mayor and Councilors make on average less than some of their counterparts. The suggestion was made to move the Mayor’s salary to $15,000, the City Councilor’s salaries to $10,000, and the monthly retirement benefits to $35. This is up from $9,600, $7,200, and $25 respectively.

There were a few other items under this rapid fire round of discussions including transportation, the organizational restructuring of the city, and a proposed “liquor by the drink” tax. In filling the role for over two years now, City Manager Meg Kelsey is now taking the time to reorganize the structure of leadership under the city’s umbrella and putting together the right people in the right places for all of the expected growth the city will see in the coming years. This restructuring also included discussions on the possibility of the city hiring a new fire chief to take on operations over the city’s fire department.

Perhaps the biggest topic from the afternoon retreat was involving the landfill and the next steps to be taken in prolonging its life and also actions that will need to be taken to eventually replace it. There are a lot of options on the table as far as what can come next, including finding more land for a new landfill, mining the existing one, continuing on with commercial sanitation or closing that program to extend the life expectancy of the landfill by another 10 or so years, or even more options beyond that. While the Mayor and Council are not ready to make a full decision as of yet, there will be more discussion about this in the future.

After the break for lunch, there were two main areas of discussion left: funding for agencies/general funds as well as planning/zoning projects. Around the time for the budget each year, the city has to decide where their funds will go over the next fiscal year. A big part of the general fund each year comes directly from the utility operations and in the future, the Mayor and Council will face some problems in this area. These problems could include efficiency and conservation, weather volatility, or territorial boundaries relating to growth. However, the city is still well positioned to handle these issues, thus taking care of the utility operations and in turn, the general funding. Currently, the city of LaGrange is sitting well with their utility rates significantly below their competitors. There are still funds in the reserve from MEAG year end settlements, MEAG stabilization funds, and other funds that have been collected. All of this combined with a newly updated natural gas system and of course, the lack of a property tax, the city of LaGrange is in good standing towards the future. As many already know, there is a lot happening as far as development goes in the city of LaGrange. The planning and zoning section of the retreat spoke to some of these projects as well as some much needed ordinance updates. There has been an extensive talk in the recent year about the new sign ordinance that has been prepared by the staff. With all of the new businesses popping up all across the city, the sign ordinances needed to be updated heavily and have been worked on in depth.

Another huge ongoing project that the group discussed was Eastside Park. With all of the improvements planned with the La-Grange Housing Authority and the new park in that area, the city of LaGrange is gearing up to make these changes for that area. This new park was presented to the council with renderings of what the space could look like, a huge asset to that area as well. As one of the main entrances to the downtown area, this section of town will receive a lot of attention in the coming years as more and more developers find their homes in LaGrange.

The author of this article can be reached via email at [email protected] troupcountynews. net.