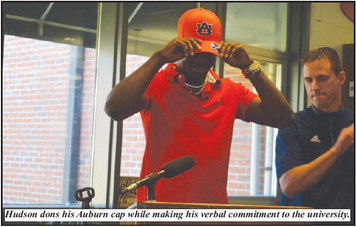 The Troup High sophomore wide receiver made an early commitment to Auburn, stating that while many great schools had recruited him, “he had a lot of great relationships with the coaches [at Auburn].”

“We learn to love the game, whether [or not] we like the game,” Kobe said in reference to the hard work he’d put in to get to this point.

Kobe then donned an Auburn cap to raucous applause from the audience.

Hudson is currently ranked by 247Sports rankings as a 4-star prospect and the number 11 wide receiver in the 2020 class. Hudson chose Auburn over several elite programs, including the in-state Georgia Bulldogs. SEC powerhouse Alabama also made attempts to recruit Hudson, as did Florida State from the ACC.

Hudson’s brother, an avid Georgia fan, said he knew that Auburn was the right fit for him.

With 2020 a couple years off, a change of commitment remains on the table. Hudson, however, now looks forward to possibly enrolling early at Auburn University.

There he will meet up with current teammate and another 4-star prospect Andy Boykin. Hudson credited Boykin with influencing his decision to play for the Tigers.

With two 4-star players currently committed to the 2020 class for Auburn University, Troup High School currently serves as a hotbed of talent in Troup County. Coach Tanner Glisson has made a once-flailing Troup football program into one of Georgia’s great successes and looks to continue to provide a platform for talented players like Hudson to move on to the next level.

The author of this article can be reached at [email protected] troupcountynews. net.