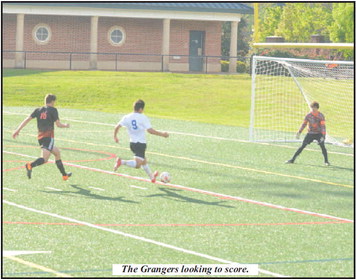 LaGrange High School competed in the first round of the Class AAAA Soccer State Championship Thursday, April 26th, with both the boys and girls teams sweeping the competition.

The Lady Grangers took the field first at Callaway Stadium, taking on the Titans from Gilmer County High. Coming into Thursday’s game with back-toback region titles, the Lady Grangers were red-hot in a blistering 8-0 victory.

For a storied Granger program, Thursday’s state playoff match was nothing new. The Lady Grangers made it to the final four in last year’s tournament and look to improve on that impressive run with a title this year.

With an 8-0 victory Thursday, the Lady Grangers started the tournament strong on both sides of the ball. An explosive offense scored eight goals on the evening while a suffocating defense prevented the Gilmer County Titans from getting on the board.

With a 4-0 lead in the first half, the Lady Grangers kept their feet down to finish the game. Several members of the Lady Granger squad contributed to their first-round beat down.

Lindsey Woodham and Caroline Thompson combined for half the Granger offense with two goals scored each.

The Granger boys soccer team took to the field next in a showdown against Lafayette. The Grangers continued the trend in a shutout of their own. With seven goals on the night, LaGrange put on another offensive showcase to dominate the competition.

Scoring for the Granger boys were Robert Reese with three goals and Max Holcomb, Liam McDonald, Jimmy Cancino, and Harrison Hunnicutt all with one goal apiece.

The Grangers have a lot to celebrate. The two soccer teams combined for the night for a 15-0 shutout of their foes in the first round of state.

The Lady Grangers look to ride this momentum for another victory with a win against the winner of the Jefferson vs. Marist game while the boys will face off against Marist or St. Pius X.

The Grangers looking to score.

The Grangers seek possession of the ball.