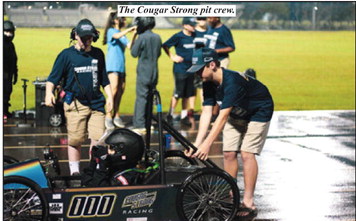 GreenpowerUSA is the hottest STEM program that you’ve probably never heard about it.

The initiative focuses on providing students with hands-on experience in engineering and project management.

And it’s causing quite a stir at Long Cane Middle School.

“It’s made them like rock stars in the school,” Long Cane Principal Chip Giles said of the inaugural season the of the GreenpowerUSA Cougar Strong Racing team.

The program birthed in England with its US epicenter in Huntsville, Alabama, challenges students to build an £24 racing car and compete against other schools. But that’s not all.

Students must complete the work themselves, and the program encourages innovation by allowing students to make perfonnance enhancing modification to their cars. The competition, however, is more than just a race. Students must also give a presentation related to their car, and both halves of the competition are weighted equally.

While the Cougars could only make two of the five races scheduled this year, they made their impact known.

The team catapulted to stardom in their first season with an exceptionallystrong showing that, according to Giles, put them only four minutes behind defeating the reigning three-time national champions and led them to a first-place victory against all other middle school teams.

The already-impressive feat is even more stunning when considering the Cougars’ competition.

“There’s no question that the epicenter is Huntsville,” Giles said. “There’s lots of strong, strong programs there.”

“Huntsville is an aerospace engineering place,” he noted. “Lots of engineers up there .. They have a wealth of these people up there.”

Despite not having the same level of engineering consultants to assist in their program, the Cougar Strong Racing team made several successful modifications to the team car and ultimately smoked their competition.

What exactly their enhancements are, of course, remain a Cougar secret.

Currently, the GreenpowerUSA initiative has been enacted at all Troup County Middle Schools. But it’s the Cougars who have found the early recipe for success.

The Cougars are one of only two middle school teams in the entire country to have scored over 200 points in this year’s competitions—and they only participated in two races.

Part of this may be attributed to the support of the school system.

Instead of merely having a team, Troup County Schools integrated the program into the classroom, giving each middle school a GreenpowerUSA class.

They also provided each class with their own f24car kit that students would assemble throughout the year.

This year, only fifteen spots were available, so interested students were called to the cafeteria to learn about the program and were instructed to build a resume about why they should be admitted. Surprisingly, the turnout proved amazingly diverse.

“I got over one hundred applications from sixth, seventh, and eighth graders,” Matthew Graham, the GreenpowerUSA teacher at Long Cane, said, “I had to narrow those down to fifteen, so we did that. And these were boys, girls, black, white … some had a lot of experience, some had absolutely none.” The Long Cane GreenpowerUSA team addresses the nationwide push for more females in the STEM field by having several female members. “In fact,” Giles said, “our best driver is a twelveyear- old girl.” The Long Cane principal was referring to Chloe Morris, who went into “the lion’s den” in Huntsville and put the Cougar Strong team in first place. Starting in tenth, she needed only eighteen minutes to leave her competitors in the dust and take the firstplace position. The Cougars had two driver changes—to Sebashtian Ferrar and finally Kevin Webb—but retained the lead until the end of the race.

With a sixth-place ranking in the presentation phase, the Cougars wound up with a second-place overall plaque in just their second competition. For Long Cane, this is just the beginning.

The Cougars will have two teams next year, with some of their veterans returning.

While cool for students, it’s about more than just winning a race.

“They learn to work as a team, problem solving— every day there’s a problem-solving exercise— public speaking … Everybody has evolved into having a job, a specialty. And everybody has to do their job to make it work.

“We have this in our schools, and the public doesn’t know about it,” Giles said.

The program also teaches students the foundations of business presentations and social-media management while bolstering their creativity and innovation in engineering.

All-in-all, the program provides students with employable skills that are important both if they choose to continue their education or head into the work force.

Giles and Graham remain vocal supporters of expanding the program throughout Troup County and hope to see the edition of GreenpowerUSA to both the elementary and high-school levels. The pair noted their willingness to allow budding programs to visit the school so that they can have a model for success. But it’s not just Troup County.

The pair hopes for a competitive environment throughout the state and would like to see Fayette, Carroll, and Coweta counties develop programs of their own.

The success of the program at Long Cane depended heavily on their sponsors.

“We didn’t spare them the proper equipment,” Giles said and noted that one competition in Huntsville can cost as much as $3,000.

The pair held a “Sponsors Luncheon” this year, where they, along with the team, highlighted the program’s benefits and raised enough money for the program’s first year.

Giles noted that with two teams next year, the costs will likely double. For now, the future of the Cougar Strong Racing team looks bright. With a chance to potentially host araceoftheirown—through the help and sponsorship of the recently-opened Great Wolf Lodge—Long Cane Middle already has in mind some of the modifications that they’ll need to be even better next year.

“We’re on the ground floor of something that could really be growing really, really fast in this area,” Giles said.

“But even if it’s not, it’s here in Troup County at all three middle schools, and our kids are a great example of what this program can do if properly resourced and properly led. And look at the success we just had.”

“We have two big goals for next year,” Graham added, “I want both teams to be competitive for the first-place spot, but I also want to do what we can to help other teams get started.

“We’re trying to be the ambassadors for GreenpowerUSA in this area,” Giles said.

With a little effort, the pair believes that the Cougar Strong team has a shot to take the number one spot next year.