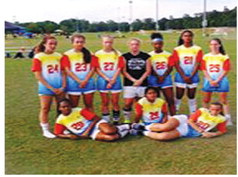 Troup County News previously reported on an upcoming summer soccer camp to be held by LaGrange High coach Shane Pulliam We have since spoken with Pulliam for additional details.

As previously noted, the camp, starting June 5th, will be divided into two sessions for children under thirteen years of age, and for those older than thirteen. Held twice a week, each session is $5, or the payments can be made monthly. The camp will run for seven weeks.

Pulliam had a strong first season as LaGrange’s boys soccer coach, with the team making it all the way to the second round of state.

Pulliam has quite the resume when it comes to participating in 3×3 tournaments. He has had four teams win the 3×3 national championship and is quick to highlight the value in playing 3×3 soccer.

According to Pulliam, who has been doing these tournaments for nearly a decade, 3×3 soccer is different than the game played throughout most players’ recreational or club seasons. With a smaller field, the game forces players to “make better decisions on and off the ball, get better at attacking and defending shape, [have] a better touch on the ball, and [get] better at communication.”

With no place to hide, players have no choice but to improve their skills, as they cannot “depend solely on physical ability.” This is Pulliam’s third generation of summer soccer in LaGrange. Stressing that the team is open to players of any school— not just LaGrange—Pulliam has selected the team name “Sea Turtles” for this year’s sessions.

Pulliam notes that he always provides custom jerseys that come from a fun summer theme. Previously, while at Whitewater, he coached the Pink Flamingos, and last year he coached the Parrotheads while at Mountain View High.

While the sessions run Tuesday and Thursday every week, tournament play takes place every weekend. If a team receives a metal, they will qualify for the S.E. Regional, and the top twenty-five teams will be invited to participate in the national championship that takes place in either Memphis or in Disney.

Last year, one of Pulliam’s Parrotheads teams finished tied in the top ten for the Silver Division. Participating in summer 3×3 soccer provides players across Troup County with an engaging way to stay sharp all year round.

More information regarding the camp can be found on the official LaGrange High boys soccer team Facebook page.