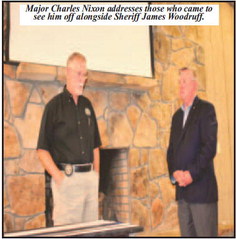 Major Nixon started his well deserved retirement on Wednesday after 30 years of service to the people of Troup County and the Troup County Sheriff’s Office.

Charles has served the Sheriff’s Office in varying sorts of supervisory capacity for the majority of his career, but he will really be missed for his friendship and the community service he has given to local citizens — particularly the kids at Camp Pineland.

Nixon began his law enforcement career at the Luthersville Police Department before quickly moving to the Troup County Sheriff’s Office in 1988, where he began as a patrol deputy. A few years later in 1992, he was promoted to Corporal and later to Lieutenant over patrol the next year. Nixon later became an investigator and was eventually promoted to Captain and Chief Investigator. Nixon worked in the Criminal Investigations Division for 16 years.

Shortly after Sheriff James Woodruff was elected, he promoted Charles to Major, having him oversee all departments as he has done for the last five years.

Major Nixon is possibly best known for his love of classic cars and organizing the sheriff’s office’s annual benefit car show that supports the Georgia Sheriff’s Association’s Youth Home, Camp Pineland. The youth camp houses dozens of young men who are often the products of abuse, neglect, and dysfunctional families.

Now that Nixon is retiring, the car show is going on hiatus, but being replaced with a charity softball tournament headed up by Lt. Jeff Duran.

In the next chapter of his life Major Nixon looks forward to being able to spend more time with his wife and grandchildren, and of course, cheering on his Georgia Bulldogs.

Charles says the thing he will miss the most is the people he has worked with over the years. Of course, they’ll still be around, but not being able to see friends, coworkers, and so many community members on a daily basis will take some getting used to.

One thing Nixon won’t miss is the long hours and constantly being on call. Nixon advises he has been on call 24 hours a day, 365 days a year for the majority of his three decades of service. As an investigator and a member of the Sheriff’s Office Dive Team, that often means long unexpended hours and weeks without a real day off.

One piece of advice that Charles would like to give younger deputies is to treat people the way that you want to be treated. That mantra has certainly served Nixon well over his decades of public service, as evidence by the number of people who came to wish him a fond farewell.

Congratulations Charles on your retirement and we all wish you the best for the next chapter of your life!