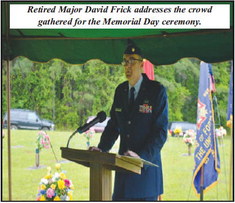 Monday morning a large crowd of veterans, along with their families and supporters, gathered at Restlawn Memory Gardens on Mooty Bridge Road in LaGrange in order to honor the lives of fallen soldiers during the annual Memorial Day service hosted by the West Georgia Veterans Council.

The former servicemen hold the ceremony each year to remember the brave men and women who gave their lives for our shared freedom and protection. The Veteran’s Council also works to place a flag on every veteran’s grave over Memorial Day weekend.

While officially established as a Federal holiday in 1971, the holiday that became our modern Memorial Day originated after the Civil War as Decoration Day, an occasion to decorate the graves of fallen soldiers with flowers. The end of May was chosen as a time of year when the most flowers would be blooming in the United States. Since then we’ve shifted more toward placing miniature American flags near each headstone rather than flowers. Unlike Veteran’s Day, Memorial Day is meant to specifically honor the lives of men and women who died while serving in the U.S. military.

Keynote remarks were given by Major David Frick, U.S. Air Force Retired, who currently leads the Junior ROTC program at Troup High School. Frick’s ROTC cadets also posted the colors for the ceremony. Each year the Veteran’s Council chooses a different deceased veteran to place a wreath during the Memorial Day Ceremony. This year, the wreath was given to Roger A. Smith, a former Troup County Veteran of the Year and member of several veteran organizations.

Major Frick spoke about his 22 years of military service and primarily about his deployment to Iraq in 2008.

Though he is well decorated for his distinguished career, included earning a Bronze Star, Frick admitted he was never really in combat deployment. He served in an administrative capacity in a combat zone. “Basically, I bought things for the Air Force. Planes, bullets, parts, repair, and so forth,” said Frick.

But that didn’t go without danger, especially in Baghdad. Frick shared a series of near miss stories that taught him both the dangers of war and how living and dying in a war zone is often a matter of chance or God’s will.

Frick told a story where two unit members were killed during an air strike, but they weren’t fighting. They were killed while working out in the gym. They just happened to be in the gym when the rocket hit. Any other time it could have been him in the gym, said Frick.

Frick also reminded the crowd to remember the sacrifices given by the families of those who serve in the military.

“Today, we remember those who have given their lives to ensure our freedom. Let us also remember, the families that they left behind and the families of those who are currently serving in our armed forces. No one understands the sacrifices our service members make every day better than them,” said Frick in closing.

After the regular service, a wreath was placed on the grave of Sgt. Hammett Lee Bowen Jr. who won the Medal of Honor for saving three of his fellow soldiers in Vietnam. Every year, regardless of where the regular ceremony takes place, a small group of the Veteran’s Council moves to place the wreath in order to specially honor Bowen, who went above and beyond the line of duty to fall on a grenade for his unit.