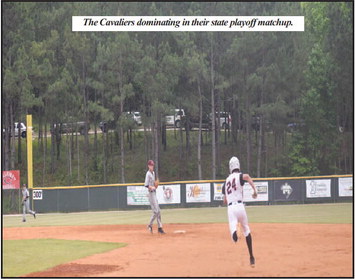 Both Troup and Callaway both saw their historic baseball seasons end in the state playoffs.

Callaway, competing in Class AA, was only one game away from a shot at the title game. Destroying eventual title-winner Benedictine in the first game of the Class AA semifinals, the Cavaliers ultimately lost the last two games of the series for a disappointing end to an unbelievable season.

The Troup High Tigers, co-region champions of Region AAAA, took perennial powerhouse Blessed Trinity to the wire in the second round of the state playoffs but ultimately saw an end to their season as well.

Now with the dust settling with the completion of the state championship rounds, the Cavaliers and Tigers both find themselves ranked in the top ten in their division according to one poll.

The Georgia Dugout Preview, an annual baseball magazine that focuses on high-school baseball in the state of Georgia, released their final rankings of the 2018 season.

The Cavaliers are currently ranked third in Class 2A. With a final record of 27-12, the Cavaliers dominated all season to win their second region title in a row.

The full rankings for Class 2A are:

The Cavaliers beat number-five Thomasville earlier in the playoffs to reach the semifinals and also defeated Heard County to claim their region title.

Much of the Cavaliers’ success this season came from the excellent work of senior Chandler Lott on the mound. Lott carried the Cavaliers throughout the year and was aided in clutch situations by phenomenal backup Wesley Marchmann.

The Cavaliers had an explosive offense this past season and look to carry over their success to next year.

The Tigers enjoyed one of the most dominant seasons in program history. Led by Colby Williams and Garrett Casey on the mound, the Tigers featured an exceptional lineup that included Auburn-commit Ryan Bliss as well as several other key players. Cooper Doughman remained an offensive staple, hitting multiple homeruns throughout the season. Seniors Kenly Bridwell and Brantley Robinson were also integral to the Tigers’ success.

Troup shared the region title with Cartersville this year and also recorded two blowout wins on their rival LaGrange. The Grangers struggled throughout the season and lost in the opening of the state playoffs against Northwest Whitfield.

The Tigers beat number-two Cartersville earlier in the season to tie for region champions and lost to number-three Blessed Trinity 3-2, 6-4 in a close second round of state.

Troup had an explosive end to the season with the Tigers outscoring their opponents 56-21 in the final five games of the regular season. Williams and Casey continued Troup’s streak by decimating Ridgeland in two shutouts in the first round of the state playoffs.

Though disappointing for the Tigers, Troup’s loss to Blessed Trinity proved much closer than many may have believed. Troup Coach Craig Garner used the baseball powerhouse as a measuring stick for his team all season, and the Tigers came within three scores of defeating them to continue their playoff run this season. With a win over Cartersville already in the books, it’s foreseeable that if the Tigers had made it past Blessed Trinity, they could have been playing for it all.

The Tigers will return many key players on next year’s team, including pitchers Casey and Williams, along with Cooper Doughman and Luke Purnell. However, they will be missing seniors Ryan Bliss, Brantley Robinson, and Kenly Bridwell.

Bliss, an all-star player who has already committed to playing at the next level, remained a constant threat in the outfield for the Tigers and played in an integral role in the Troup defense. Robinson kept Troup offensively competitive while being an efficient pitcher who could relieve Williams and Casey on the mound when needed. Bridwell, with a balance of offensive and defensive talent, helped contribute to the team’s season-long success.

Both Troup and Callaway look to build on their success next season, but LaGrange fans are hoping the playing field will be a bit more leveled in the coming year.

The Grangers, after suffering one of the worst seasons in recent program history, have returned long-time coaching legend Donnie Branch after the departure of former head coach David Smart. Branch, who retired from the program more than half a decade ago, was a staple in the LaGrange athletic community, leading the Grangers to a 2004 state championship and multiple other titles.

With Branch’s return, the Grangers may find themselves back in the race for a Region 4A championship while the Tigers look to defend their title.

Each number one is the winner of its respective division in the state championship game.

Though the school season may be over, several Troup County School System students will be competing in this summer’s upcoming travel ball season.