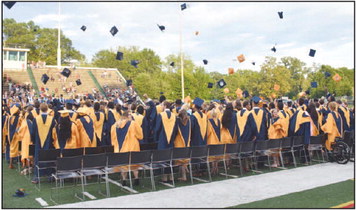 Troup High held its graduation ceremony at Callaway Stadium Friday, but it wasn’t all smooth sailing.

Under the threat of a downpour, the Troup County School System moved the ceremony up to 6:00 PM, instead of the originally-planned eight o’clock proceeding.

Jackson Services supported the ceremony with two of their Jackson Services community tents. Open to the public, the tents have become a staple at major community events in Troup County, as they provide an inclusive space for all parents. Designed with special needs families in minds, the air-conditioned tents provide private space needed for citizens of all walks of life to conveniently participate in community events.

The commencement kicked off with a processional of Pomp and Circumstance followed by a Presentation of the Colors by the Troup High School AFJROTC Color Guard.

Bliss, in addition to being an honor graduate and Senior Class President, was also a star of the incredible 2018 Troup High baseball team. An Auburn baseball commit, Bliss helped his team make it to the second round of the state playoffs before losing to the then-number-one team in rankings. Bliss was accompanied in graduation by two other Tiger baseball seniors: Kenly Bridwell and Brantley Robinson. The three seniors will be missed on the field, and we at Troup County News join the Tiger family in wishing them the best in the next chapter of their lives.

Grace Cotton, Salutatorian of the 2018 Tiger class addressed the class next followed by Valedictorian Nicholas Ryan.

Ryan called on his peers to recollect on the times they had in high school and what had led them to where they were.

“It was during this time of our lives that we really started to question things, think about them on a deeper level—especially ourselves,” he said.

“You don’t want to stagnate,” he continued. Addressing the existentialist crisis that teens become aware of in high school, Ryan offered a hopeful parting message to his peers.

“We are always changing. It’s just how we are. We have the power to make ourselves better—for us, of course, not anyone else.”

Ryan’s words are particularly resonant to the graduating seniors who look to tackle the next phase of their lives. Whether, it is work or continued education, the Troup High Class of 2018 looks to continue their journey of self-cultivation as they lay the foundation for their future.

The Troup County News would like to congratulate all graduates of the Troup High Class of 2018 and give special distinction to the following distinguished honor graduates: