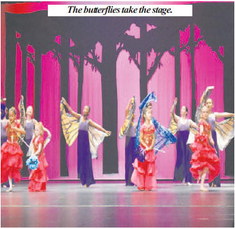 The Royal Dance Academy kicked off their twoday showing of Alice in Wonderland Wednesday night at 6:30 PM in the Troup High Performing Arts Center.

Beautifully choreographed by the daughter of ballet director Miriam Oropeza, the spectacle featured students of all age levels.

Free to the public, the event relies on sponsors and donations from parents and families.

Stunningly yet delicately delivered, the program brought to life a time-honored classic. Starring Ashley Juarez as the White Queen, Madison Bilbo as the Queen of Hearts, Shelby Brunair as Alice 1, Lexi Trammell as Alice 2, Connor Everingham as the White Rabbit, Tamyra Dukes as the Mad Hatter, Sydney Snyder as the March Hare, Chris Tucker as the Chesire Cat, Sophia Munoz as Tweedle Dee/Flamingo, and Debbie Torrez as Tweedle Dum/Flamingo, the dance featured a diverse cast of multiple backgrounds and age levels.

No matter their age, the stars of the show gave a flawless and enthralling performance, capturing the audience’s mind and imagination.

All while the program’s young learners won their hearts.

With an array of threeto- five-year-old dancers taking the stage as flowers, objects, teacups, and porcupines, the program seamlessly transitioned through sequences of serious, thought-provoking performance and innocent, light-hearted humor.

Broken into two acts, the recital featured twentyeight acts plus a celebratory dance battle. The climax of the show comes in a surprising and intricatelychoreographed confrontation between Alice (Lexi Trammell) and the Queen of Hearts (Madison Bilbo).

The show itself had no dull moment, as the silent choreography spun a captivating tale on stage. Possessing an old-fashioned charm, the show transcended mere entertainment by connecting to the audience on a deep level. No words were needed, as the graceful movements and emotional expressions spoke straight to deeper layers of consciousness. The recital’s ending dance battle honored Ashley Juarez, a senior who recently gradua ted from the academy and will be attending Valdosta State.

Mrs. Miriam Operoza’s niece also received honors, as she will soon be traveling back to her home of Mexico City. Having lived with Operoza for years, her departure will be felt by the Royal Academy School of Dance.

The night’s top honors, however, were reserved for Operoza herself. Certified as a royal instructor in London, Operoza has dedicated her time and expertise to providing top-quality education in the LaGrange area while putting on shows like Alice free to the public.

The Troup County News would like to thank Mrs. Operoza for the tremendous gift she continues to give to the community.

As stated by the recital’s host, “It really doesn’t get any better than this.”

The two-day recital is certainly worth a second viewing, and all participants young to high-school level possess immeasurable talent.

The Royal Academy School of Dance will be holding their summer dance camp from June 18-22 and July 9-13. Those interested can register at Parks and Rec in LaGrange, GA. The camp’s time will be from 9:30 AM to 12 noon.

There will also be an intensive dance camp for intermediate to advanced learners from June 11-15 and July 16-20. Those interested can see Mrs. Miriam for more information.

Those looking for more information can email [email protected] om.

The author of this article can be reached at [email protected] troupcountynews. net.