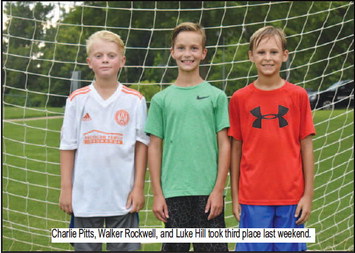 Coming off an astounding showing in their second 3×3 tournament, the Sea Turtles returned to practice Tuesday evening. The U11 division took to the field at 5:30 PM before the high-school-aged Sea Turtles once again showed up at 7:15 only to have lightning cut their practice short.

Several players in the U11 practice competed in the June 24th tournament in Cartersville where the young Sea Turtles took third place in the competition. Speaking with Troup County News, Luke Hill, Charlie Pitts, and Walker Rockwell of the third-place U11 team stated that the tournament was “fast” and “fun.”

“There’s a lot of sprinting,” Rockwell said when describing the game.

The U11 team’s third-place finish comes in stark contrast to their performance in the first 3×3 tournament. To start off the year, the U11 team won only one game while losing four and not placing in the competition.

The team’s growing chemistry helped them improve. Hill and Pitts, long-time friends and soccer playmates, noted that they have played soccer together for years, and this dynamic may have helped them in their last 3×3 tournament.

The U11 division took to practice under blue skies Tuesday, with several new faces joining the field. Most notably, four girls joined the Sea Turtles practice and look to field a team at the upcoming 3×3 tournament.

The summer sessions, open to both boys and girls, has yet to have enough girls join to create an official girls 3×3 team; however, now Pulliam is looking to take his first group of girls to this weekend’s to this weekend’s 3×3 tournament.

By the looks of things, they’ll be ready. It was boys versus girls in one 3×3 matchup during Tuesday’s practice, and though the girls had little 3×3 experience, they were fast learners and soon earned a commanding 4-2 victory over their male counterparts. Listening closely to Pulliam as he took to the field to teach proper 3×3 defense, the girls followed his lead to a dominant victory.

As practice continued, the looming threat of a thunderstorm became more evident as a darkening sky began to advance toward the field. Though there was talk of possible lightning, the high-school-age practice continued until a real flash was spotted.

For the second practice in a row, Pulliam was forced to have his players take cover in safety. With practice just starting however, Pulliam held out hope that the storm would pass and give him the green light to go.

A second and third flash within the next ten minutes put those hopes to rest, and Sea Turtle practice was again canceled for the older students. Though this seemed to have little effect in last weekend’s tournament, with the Sea Turtles taking first and second place in the Cartersillve 3×3 after missing their last practice, being forced to abandon two practices in a row may begin to start showing in results.

It’s a possibility that, while aware of it, the Sea Turtles are working hard to combat. Standing under the complex facility waiting for the lightning to pass, the players did what little practice they could in such a limited space. Speaking with Troup County News, several of the players who competed in the Cartersville championship game gave their thoughts on the game.

The Sea Turtles 2 team, eager to boast on their win, made sure to differentiate themselves from the Sea Turtles 1 team. Though all in the name of jest, the combative jokes shared between the two groups captured the healthy competitiveness that Pulliam hopes his practices promote.

Jokes aside, the Sea Turtles 2 team noted that playing in practice with their opponents helped them pull off the win.

“We’re used to their style and formations,” a player said, speaking of the Sea Turtles 1 team. “That made it easier.”

Some players on both teams were competing in their first 3×3 and noted that the sport was fast-paced but fun and that making it to the championship game in their first run was a great feeling.

Both teams are looking to repeat and even build on their success in the upcoming tournaments.

Practices continue every Tuesday and Thursday with a break the week of Fourth of July.