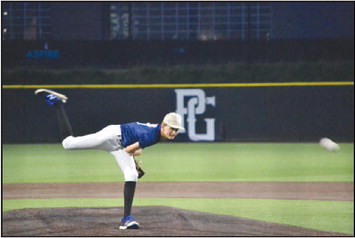 Trevor Booton of LaGrange earned a spot on the USSSA All-American team as a direct select for the second straight year. Of twenty-four athletes selected, Booton is one of the only three chosen from Georgia and the only one from Troup County.

For Booton, baseball is a way of life. Though the teen also plays basketball and runs cross country, his dedication to baseball is almost unparalleled.

“We play baseball ten months out of the year, six days a week,” his father, Terry Booton, said.

“I go out and hit, stretch, throw … every day. Unless it’s raining or something, every day.”

Booton has maintained his routine for nearly two years since his father bought him a batting cage to practice with outdoors. And his dedication has paid off.

In addition to being selected in back-to-back years as an USSSA All-American Direct Select, Booton has received numerous other awards.

“They don’t really give trophies anymore,” his father said. “They give rings.”

And Trevor has quite the collection. Along with several trophies, Booton has been awarded over twenty rings. To put it all into perspective, the young athlete’s career with the USSSA spans about six years, meaning Booton averages four rings a year.

“I want to be in the pros someday,” he said. And though he’s a Braves fan, he looks forward to the opportunity to play for any team.

Scholarships are another goal. And while he’s an Auburn fan, Booton is open to playing for other schools in the SEC and ACC if afforded the opportunity one day.

The young athlete is giving it his all to earn this kind of opportunity. In addition to playing with USSSA, Booton has played for several teams over the last year, including Perfect Game and Rec Ball.

He’s also managing to juggle his active baseball life with school during the year, making sure to finish his school work before tackling baseball.

“I get school out of the way,” he said, adding, “For example, if I have homework and a game in Phenix City—it takes an hour to get there. I’ll do homework on my way to the game.”

His efforts have made his father proud.

“Of course I’m proud of him,” Terry Booton said. “He’s showed out real well this year and has played with a number of teams.”

For his part, Trevor is looking forward to playing for the Grangers one day. Though only a seventh grader now, Booton has already worked with the team and looks to bring his talent and skills to the program when he is in high school.

Both Bootons commended the return of Donnie Branch to the LaGrange High baseball program and look forward to Trevor’s eventual time with the Grangers.

Now, however, their focus is on Trevor’s Direct Select honor. Though Booton was selected last year as well, the teen was also given offers by the World Series, so this year will be a new experience for the family.

The USSSA is among the largest sports organizations in the world with over 55,000 teams across the country. Many travel ball leagues are through the organization.

The USSSA All-American league is a highly-selective league featuring eight divisions across the country. Booton made the Atlantic Division, representing South Carolina, Georgia, and Florida. The twenty-four members selected for the team will be split into two teams that will face off against other divisions starting later this summer.

Players wishing to be part of the All American teams were selected after tryouts, with the best players being chosen. Booton, one of only three Georgia selects, received a great honor in being selected for two years as a Direct Select in the USSSA All-American league.