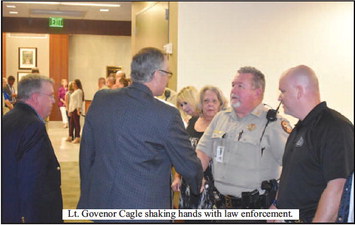 Conservative gubernatorial candidate Casey Cagle returned to LaGrange Thursday for a tour of the city. The trip included a brief stop at the men’s luncheon at the First Baptist Church on the Square. Escorted by Troup County Commission Chair Patrick Crews and Sheriff James Woodruff, Cagle met with local law enforcement officers and made what might be a final pitch to the citizens of LaGrange before the upcoming run-off election in July.

Cagle, who previously came to LaGrange on April 24th, spoke briefly of his vision for Georgia. Stating that he was told not to be political, Cagle continued campaign-style speech at the men’s luncheon.Astrong conservative, Cagle touted Georgia’s economic development during his time as Lieutenant Governor and highlighted the advances in education the state has made under his leadership by noting that the THINC College and Career Academy here in LaGrange came about as a result of education programs he started.

Currently, Cagle is locked in a runoff election after failing to receive the majority of votes in the initial GOP primary vote. Cagle’s opponent, Brian Kemp, drew national ire earlier this year with campaign ads that voiced his strong support for the second amendment as well as strong deportation policies.

Cagle, a strong believer in conservative values, supports both the second amendment and strong immigration policies but spent the majority of his first visit to LaGrange focusing on his family values and economic policies. A firm pro-life believer, Cagle championed a vision of Georgia that committed to conservative Christian values while maintaining the strong economic policies that he says have led to the addition of over 40,000 new businesses to the state.

After his speech at the luncheon, Cagle followed Sheriff Woodruff’s lead to the Troup County Courthouse where the gubernatorial front runner personally shook the hand of law enforcement and courthouse employees.

The July 24th runoff is shaping up to be a close one. Current polls have Cagle with a marginal lead in the race, with one poll conducted by Alabamabased consulting firm Cygnal having Cagle with a mere 44-43 lead.

The election comes in what could be a tipping point in Georgia politics as Democrats around the country prepare for what has been dubbed a “blue wave.” The movement seeks to respond to President Trump’s landslide presidential victory by sweeping Congressional and other governmental seats across the nation.

Stacey Abrams made national headlines in May by securing the Democratic gubernatorial position. Abrams, who would be the first African-American female governor of Georgia, will face off against either Kemp or Cagle for the governor’s seat.

Some current polls suggest that a Cagle victory in the GOP primary would bolster the GOP’s chances in the upcoming gubernatorial race. Cagle is commonly reported to be the favorite over Abrams if he should secure the GOP vote while Kemp’s dramatic campaign ads have put him at a disadvantage to the Democrats in the polls should win the July 24th runoff.

For many conservative voters around the state, a victory for Cagle would mean the preservation of the small-town, conservative, Christian values the state has traditionally held.