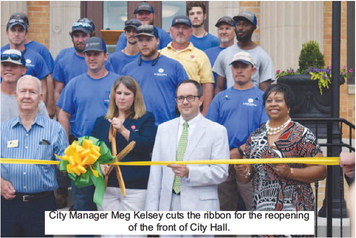 City Hall closed its front doors following a “Christmas storm” in 2015. The storm flooded the basement and destroyed some of the building’s infrastructure.

But for City Manager Meg Kelsey, the storm provided more than just an opportunity to repair cracks that led to flooding in the building’s foundation. The project became a way to re-envision the front façade of City Hall in a way that blends the building’s history with other more modern designs found in downtown.

LaGrange Mayor Jim Thornton called the building “one of the most historic in downtown LaGrange,” noting that it’s been the seat of City Hall for ninety-two years.

“I think it’s a beautiful building that’s only gotten more beautiful in this recent renovation,” he said.

“This was a project that was born out of necessity,” he said. “But we could have simply solved the water issue and not gone any further.”

According to Thornton, it was Kelsey’s “vision and leadership” that oversaw the City Hall restoration project.

“This project really began with us trying to fix a problem,” she said. “When we did that, we had to rip up all the shrubbery and dig down into the base of the foundation of the building.

“All our shrubbery was gone, so I thought this was a good opportunity for us to get a refreshed look.”

Kelsey said it wasn’t hard to get the rest of City Hall on board.

“It took us a while to bring this project to fruition, but I showed the vision that Skipp had created to the Council, and they were all in favor of it.”

Both the Mayor and the City Manager noted the importance of LaGrange’s city crew in the project.

“The majority of the work you see done,” Kelsey said, “was done by our talented and hard-working city staff: the landscape department, new shrubbery, sod, and soon to be new trees on the end here; the street department, the new curbing you see, the new pavers, and the new City Hall sign; the electric department, our street lighting and our nighttime illumination of our columns and our building; and the gas department, with the installation of our new gas lanterns.”

Kelsey noted that the City Hall renovation “added to the enhancement of the flourishing downtown area.”

The City also took the restoration as a way to honor former employees Thomas Hall and John Bell.

Included in the new look of the new City Hall façade is a bench accompanied by a bulldog statue on permanent loan from local artist Chuck Moore.

“As with many of the benches around downtown, this one is dedicated to two long-time City employees. One, in memorial of our former clerk-treasurer John Bell, and the other to our late City Manager Tom Hall,” Kelsey said.

The bulldogs that once stood guard over Hall’s office have now been joined by one to guard City Hall.

“When we got the idea to place the bench, we also wanted to add a bulldog to stand guard in front of City Hall,” Kelsey said, noting that local artist Chuck Moore assisted the City by providing the sculpture on permanent loan.

The City Hall renovation remains incomplete, as the City plans to plant new trees on either side of the building.

“With the assistance of Mr. Moore, we will be placing a bird house next to our new trees for John,” Kelsey said, saying that the former clerk-treasurer was “an avid bird watcher and lover of the outdoors.”

“Please know that Tom and John will always be remembered here and will forever be a part of the City of LaGrange family,” she concluded.

Mayor Thornton welcomed the public to come to City Hall with their relevant needs and concerns, saying the building belonged to the public.

Speeches by Kelsey and Thornton were followed by a ribbon-cutting to celebrate the official grand reopening. Those in attendance took pictures on the newly-renovated front steps of City Hall for “City Selfie Day” before going inside to enjoy light refreshments.