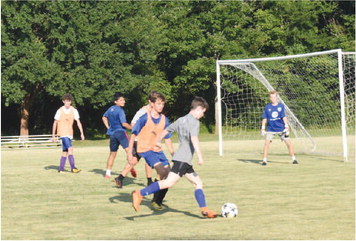 The newly-merged AFC Lightning Troup club teams returned to the practice field Thursday for the group’s second practice. Separated into different groups based on their divisions, the AFC players varied in age and ability, with different coaches responsible for each group.

Practice kicked off with conditioning exercises, and for one younger division, a lesson in etiquette. Because they didn’t help clean the field at the end of Tuesday’s practice, they began their day with a set of ten pushups before starting toe touches.

The discipline and focus taught at practice will help the younger players when they start tournament play next month. Many of the younger athletes were also part of this summer’s Sea Turtles soccer team, and while talented, struggled to maintain focus in the heat and had a poor showing in their first competition. Over time, however, they managed to place in a 3×3 tournament, and many of the same players are now continuing their instruction through AFC where they will continue to develop both the physical and mental skills needed to succeed in the sport.

Older AFC players hit the ground running with a series of possession drills after warm ups. Split into two groups, the players practiced creating space and making passes with a limited number of touches.

Practice ended with a scrimmage between the two groups. Split into three teams, the players competed on a full-width field.

The stakes were high. Teams would play until a goal was scored, and the team that gave up a goal lost their spot on the field until another goal was scored.

The rotation allowed for the teams to have more playing time with little rest in between. A similar format was used earlier during the Sea Turtles’practices this summer, and this allowed for better conditioning of the players.

Heat has already become a concern this summer season, with several players falling ill inAFC’s first scrimmage against Peachtree City earlier this month. With temperatures hovering in the 90s throughout the summer season, attending regular practice is essential to conditioning the players to play in the Georgia heat.

AFC Lightning Troup meets Tuesdays and Thursdays and will play in their first tournament in less than a month.