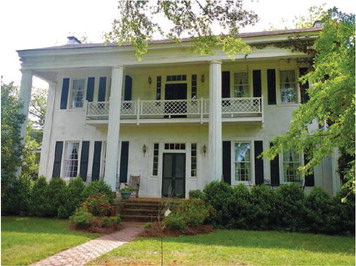 Liberty Hill, located less than a mile west of the Chattahoochee River on Liberty Hill Road, was built in the late 1830’s or early 1840’s by John T. Boykin, a pioneer Troup County resident. As described by the National Trust for Historic Preservation, Liberty Hill is a significant example of an antebellum river estate that was sustained by the booming cotton industry. The success of the estate, like others of its day, was dependent on the unique economy of the South prior to the Civil War.

The war marked a turning point in the Southern economy and ultimately changed the ambiance the South exuded. The great homesteads never quite regained what they had lost during the war. At this time and in later years, many of the spacious houses fell victim to fire or vandalism, and many were abandoned or adapted to serve as farm houses for Southerners of reduced means.

Liberty Hill is one of few surviving Antebellum Estates. Built in the heyday of the South, it remained intact throughout the war and subsequent years. The original owner and builder of Liberty Hill came to Troup County early in the 1830’s and bought land from the Moncrief family. It was not until 1836 that John T. Boykin bought the land and built his permanent residence, Liberty Hill.

After the death of Boykin, the land and house passed to his widow, Cynthia, who held it until her death in 1887. Cynthia’s will left all her land, including house and belongings, to her daughter-in-law, Elizabeth Boykin, wife of John T. Boykin, Jr., once a captain in the Confederate Army. The house next passed to Elizabeth’s daughter, Miss Jesse W. Boykin. It was Miss Boykin who sold the property early in the 1920’s, when it was acquired by Mr. and Mrs. Lindsay Ogletree, who did restoration work on the building.

In addition to being historically significant, Liberty Hill is an exceptional example of nineteenth century Greek Revival architecture. Both in its exterior appearance and in its plan, the house follows the established precedent for this style in the South. With its long central hall running front to back and flanking rooms on either side, the house is representative of the plans of many such Greek Revival buildings. The elegant columned porch is also a distinguishing characteristic of the home.

In both an architectural and historic sense, Liberty Hill is of great importance to Georgia’s architectural heritage. It is remarkable that the building has remained intact for over 125 years and continues to remain a private residence to this day.