LaGrange through the Years 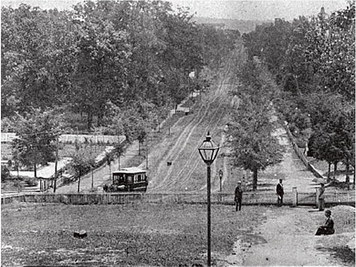 LaGrange, located approximately sixty miles south of Atlanta, is the seat of Troup County. The city encompasses some twentynine square miles and has a population of 29,599 people. The county surveyor, Samuel Reid, laid out the basic street plan, which covered 202.5 acres that has basically been unaltered since 1828.

The center of the city is the fountain in the middle of downtown. It features the statue of Marquis de LaFayette. LaFayette was a French Aristocrat and American Revolutionary hero. Colonel Julius Caesar Alford, (“The War Horse of Troup” in Congress) suggested the city be named LaGrange after overhearing LaFayette reference his wife’s estate in France and the countryside of Georgia in 1825.

During the Antebellum Era, LaGrange had an array of people to settle here. Some were from the Carolinas, Virginia, and Eastern Georgia. LaGrange was the fifth-largest slaveholding county. The city’s diversity enabled the wellto- do planters who lived in town to have diversified economic interests.

The mansions that were built by 1860 were of the Federal & Greek revival style. LaGrange, considered an aristocratic city for much of its history, boasts a legacy of prosperity. Ulrich Bonnell Phillips stated in his book Life and Labor in the Old South that Troup County “never knew a rough regime.”

The city’s economic success, powered first by cotton and later by a textile boom, allowed for the creation of local colleges. LaGrange College was founded in 1831 and is the only school that has survived since the antebellum period.

When the Civil War broke out in 1861-1865, LaGrange became a Confederate hospital zone and a refugee center. It was also a frequent stop for Confederate President Jefferson Davis. There were several companies of men sent off to battle. There was also a company of women called the “Nancy Harts” who were formed to stay and defend the home front. Ironically, on April 17, 1865 the town was invaded by a Union Company with a leader named Colonel Oscar H. LaGrange. This company burned factories, destroyed the railroad depot and tracks, and telegraph lines. Following the Civil War, prominent LaGrange citizens capitalized on a textile boom and set a course of economic development that still guides the city today.