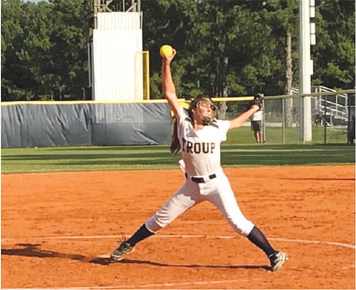 The Lady Tigers of Troup began a losing two-day stretch Tuesday at home against Central Carroll. The pair of losses drops the Tigers to 5-11 on the season.

The series got off to a rough start when Central Carroll scored five runs over Troup in the top of the first. The Lady Tigers would never recover.

Troup, who has struggled all season, failed to respond offensively and scored only one run in six innings. Central Carroll would go on to put the game away 11-1.

Avery Pearson pitched for the Lady Tigers, throwing 132 balls and allowing nine hits and eleven runs with only one strikeout.

Pearson also scored the lone run for the Tigers in the fourth inning.

The Tigers managed only three hits all evening—a worrisome sign that their offensive life just may not be there.

They had a chance for redemption, however, against a tough Heard County team at home the following day.

But things would only get worse.

The Braves would pull off an impressive 16-0 victory over the Lady Tigers.

To do this, they scored multiple runs in every inning for four innings to limit the game to five.

In the first inning, the Tigers allowed four runs; in the second and third, they allowed five each; and in the fourth, they allowed two. Heard County, however, has one of the more solid softball teams in the area, and they even shutout a tough Granger squad earlier this season.

Makenzie Miller pitched for Troup, allowing fourteen hits and sixteen runs with only two strikeouts. She pitched eighty balls on the evening.

The Tigers return to play Tuesday, September 4 against Chapel Hill at home at 5:30 PM. The Tigers will have to work hard over the next week to remain competitive against this Chapel Hill team that just thrashed the Grangers on Tuesday. Though a win is unlikely, a strong showing against Chapel Hill might indicate improvements for the Lady Tigers.

If not, they risk falling to 5-12 and continuing to slip. The Tigers showed a strong bit of a turnaround earlier this season, but their recent losses look to nullify those efforts.

The Tigers have two weeks before they get their third shot at taking down rival LaGrange—who is so far 2-0 in the rivalry this season. Troup must right its ship before then in order to win, and a strong showing against Chapel Hill—and possibly a win against Sandy Creek— may be just the motivation the Tigers need in order to pull off the upset.