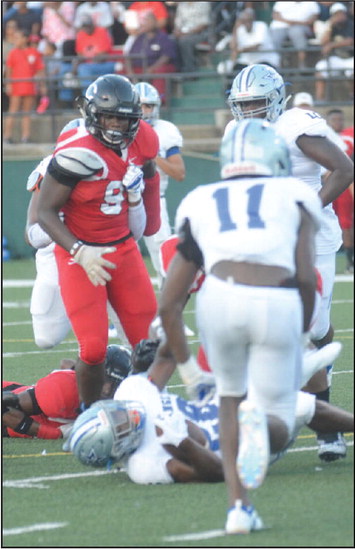 The 4-1 Cavaliers will host Bremen tonight at Callaway Stadium at 7:30 PM in a Class 2AA top-five matchup.

The Cavaliers are looking to improve to 2-0 in region play with a win tonight. Their first region victory came on the road against a weak 1-4 Temple team last Friday, but the Cavaliers will face a much greater challenge to keep their record intact.

The Bremen High Blue Devils are currently 4-0 and ranked fourth in Class 2AA.

The Cavaliers are no strangers to tough opponents, having wins over top-ranked schools from Alabama and Georgia since the preseason. They traveled to Montgomery Catholic—Alabama Region 4AAA champions—for their spring scrimmage and came away with a 33-0 victory. They followed this success with a victory over a strong Starr’s Mill team before opening their season against Alabama Region 6AAAAA Opelika.

After a dominant 35-21 finish over the Bulldogs from Alabama, the Cavaliers set their eyes on a state title—and looked every bit strong enough to capture it.

Their performance stalled, however, the following week when they squeaked out a 14-0 victory over a LaGrange team that hadn’t won a regular-season game in more than a year. Two weeks later, they suffered a 37-20 defeat at the hands of Troup.

The Cavaliers have since bounced back with a 49-0 over Temple to start region play and look to continue their momentum moving into tonight’s game.

With running back #4 Tank Bigsby and quarterback #2 Jacob Freeman leading the way, the Cavaliers hope to put together a strong showing in their first real challenge since their loss.

A win tonight will help the Cavaliers in their playoff bid later this season. According to a maxpreps.com GHSA playoff-prediction algorithm, Callaway is currently the eighth-most-likely team to secure the playoff title this year.

The two teams share only one common opponent this season so far—Cross Keys. Both teams secured blowout wins: Callaway won 50-0, and Bremen won 79-0.

Despite their big win and winless season, however, Bremen has escaped with a few close victories this season and will be hard-pressed to beat the Cavaliers tonight.

If Callaway can shake their earlier loss and play Cavalier football, they’ll get another big win tonight.